For those of us who grew up during the Cold War, the “nuclear option” was the ultimate nightmare, the worst-case scenario that would cause untold devastation. So it is apt to use that term for the weapon that Republican senators are threatening to use to transform the Supreme Court confirmation process—and, by extension, the Court itself.

The Supreme Court is unique. As most people know, it is the last word in constitutional interpretation for the entire nation and therefore has an enormous impact. But it is also the only court directly created by the Constitution. While lower federal courts are created by Congress, the Supreme Court stands alone in our nation’s judiciary as existing separately from any action of the other two branches of government. No other Senate-confirmed position is even remotely like that of a high court justice, and filling a vacancy is approached with seriousness and due regard for that uniqueness.

Throughout American history, successful Supreme Court nominees have traditionally garnered a supermajority in the Senate in order to advance to confirmation and to the nation’s highest court. For instance, each successful nominee of Presidents Obama, George W. Bush, and Clinton was able to achieve the level of bipartisan support to meet the 60-vote bar.

Because Neil Gorsuch is such a poor nominee for the Court, he is unable to meet the traditional 60-vote bar. Under the existing rules of the Senate, a Supreme Court nominee cannot advance to a confirmation vote without the consent of at least 60 senators. So under those existing rules, Gorsuch cannot be confirmed. 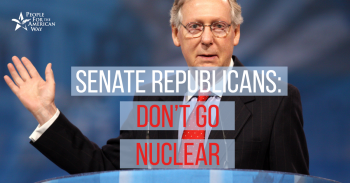 But rather than change the nominee, Senate Republicans want to change the rules. They are confident that Gorsuch would use his new position to advance their political agenda. So they are threatening to unilaterally change the chamber’s rules and allow Supreme Court justices to be confirmed by a bare majority, no matter how intense the opposition from the other party and the Americans they represent: the nuclear option. Technically what would happen if the nuclear option is invoked is that 51 senators (or 50 senators and the vice president) would vote to overrule a determination by the chair of the Senate that 60 votes are required to end a filibuster. So, in essence, 51 senators would vote to break the rules of the Senate with respect to Supreme Court nominations.

If Republicans choose this path, any Supreme Court nominee could be confirmed by a strict party-line vote. That has never occurred before, but it could become the norm, and the partisanship of the political branches would increasingly infect the nation’s highest court. Without needing buy-in from anyone in one of the nation’s two major political parties, presidents would lose any incentive they may have to engage in genuine consultation with a broad range of senators. Instead, we would see nominees even more polarizing than Judge Gorsuch, and more extreme than Justices Scalia, Thomas, and Alito.

Those justices are hardly free from controversy. Americans across the political spectrum have often vigorously challenged the rulings of the Court and the jurisprudence of particular justices. But they have done so without questioning the legitimacy of the justices or of the Court itself, in part because an institution that is supposed to be nonpartisan is populated by justices who took their positions with a certain level of bipartisan support of the United States Senate.

That would end if the GOP chooses to exercise their slight majority to forever change the rules—and the Court.

Democrats have done their due diligence. Based on their close examination of the record, the vast majority have concluded that Neil Gorsuch cannot be allowed on the Supreme Court.

Now Mitch McConnell and his cohorts have their own choice to make. It’s completely up to them; that’s why it’s called the nuclear option.

The traditional 60-vote threshold for Supreme Court justices has allowed the president and the Senate to better live up to our national motto: e pluribus unum (out of many, one). We will see if the Senate GOP prefers the motto to be “might makes right.”