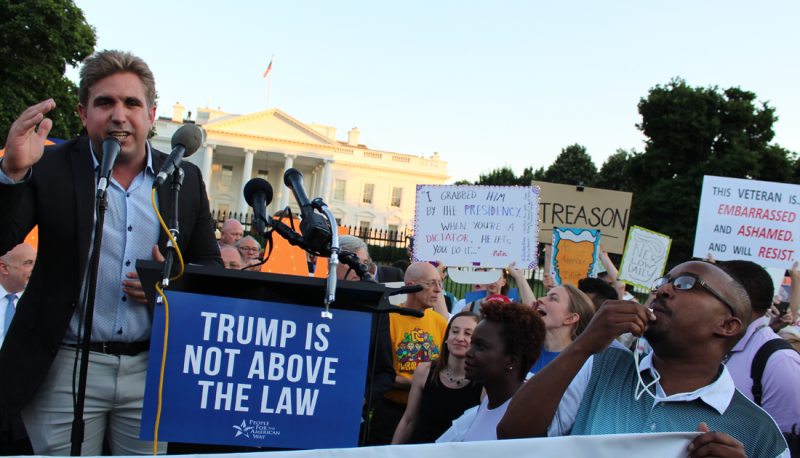 On Wednesday, July 18th, in nearly 200 towns and cities across the country, people gathered at public vigils to confront the corruption of the Trump administration and demand a democracy that works for all Americans. Speakers and activists in attendance also stressed the importance of protecting the Mueller investigation and the mounting need for a fair-minded justice on the Supreme Court who won’t give a free pass to Donald Trump.

In Washington, D.C., over 1,000 people and a robust program of speakers including seven members of Congress and several leaders from allied organizations gathered in front of the White House for the candlelit vigil. PFAW’s own Rio Tazewell and Diallo Brooks were two of the speakers to address the crowd.

These vigils also served as the public launch of a new coalition effort known as the Declaration for American Democracy that will build support for a suite of reforms to create a political system that works for all of us, not just the privileged and the powerful.

After Trump’s shocking display in Helsinki, where he sided with Vladimir Putin over U.S. intelligence agencies, the vigils — which had been weeks in the planning were suddenly more relevant and more needed than ever.

.@senblumenthal at the vigil to #confrontcorruption & #defenddemocracy! If you care about your democracy, show up! https://t.co/S6RTec4Azx

PFAW’s @DKBrooks45: “The president empowered by the Republican Congress is destroying our democracy. We’re here to say that we’re going to fight back against this corruption. Because this is our country.” https://t.co/mbhmdlgtI0 #ConfrontCorruption #DemandDemocracy pic.twitter.com/gMokrxMUMk