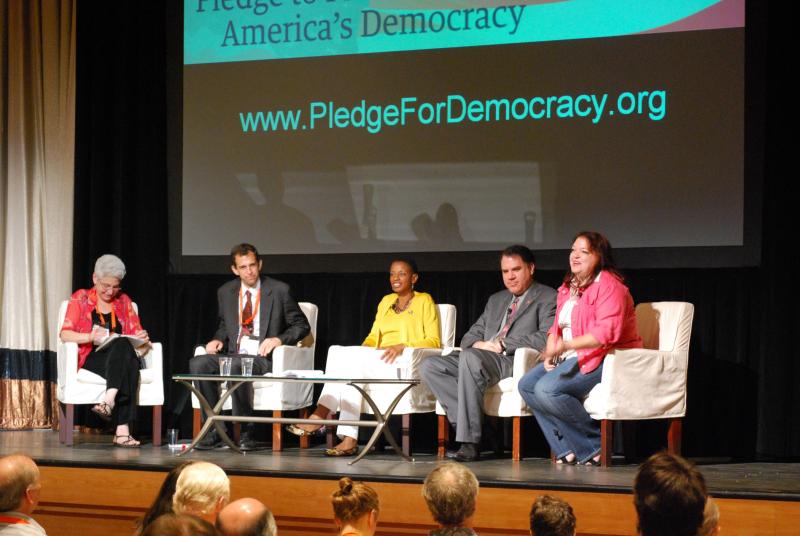 When we commissioned a poll to gauge what Americans thought about the Supreme Court’s decision in Citizens United v. FEC, we expected to find strong opposition to the idea of unlimited corporate influence in elections. But even we were stunned by how strong that opposition was. 85% of those surveyed disagreed with the Supreme Court’s decision to give corporations unlimited power to spend in elections, and 74% supported a Constitutional Amendment to reverse it.

Today, in a packed Netroots Nation panel organized by People For, activists and elected officials gave their loud and clear endorsement of a Constitutional Amendment to undo Citizens United and return elections to voters.

The audience responded with a standing ovation when panelist Rep. Donna Edwards declared her support for an amendment saying, “Let’s not let anything undo our power over our elections.”

Edwards spoke about the pressure members of Congress face from the health care and energy lobbies, and other powerful interests. “We cannot afford in this country to have elected officials afraid to stand up to that,” she said.

Corporate interests, Edwards said, “are not just trying to influence the process, they want to own the process.”

In Congress, Rep. Alan Grayson added, a corporate lobbyist “can walk into your and office, say ‘I have $5 million, and I can spend it for you or against you.’…this really is a threat to our democracy.”

All of the panelists, including Public Citizen’s Robert Weissman, Lisa Graves of the Center for Media and Democracy, and People For’s Marge Baker, agreed that passing a Constitutional Amendment wouldn’t be easy, but is necessary.

Baker called the Citizens United decision “radical, dangerous, and pernicious,” and emphasized the opportunity it creates for progressives to reclaim the debate over the courts as we work to reverse it.

“Citizens United is one of the all time worst Supreme Court decisions in the history of the United States,” Weissman said, “It’s certain that it’s going to be overturned. The question is, are we going to overturn it in the next 4-5 years, or wait 50 years.”

Graves added that Americans have managed to amend the Constitution throughout our history. “They did it with the Pony Express,” she said, “and we have Web 2.0”

Grayson and Edwards have both agreed to sign the Pledge to Protect America’s Democracy, a pro-amendment effort organized by People For and Public Citizen. Urge your candidates and elected officials to do the same, at www.pledgefordemocracy.org.

UPDATE: Netroots Nation has posted a video of the discussion: