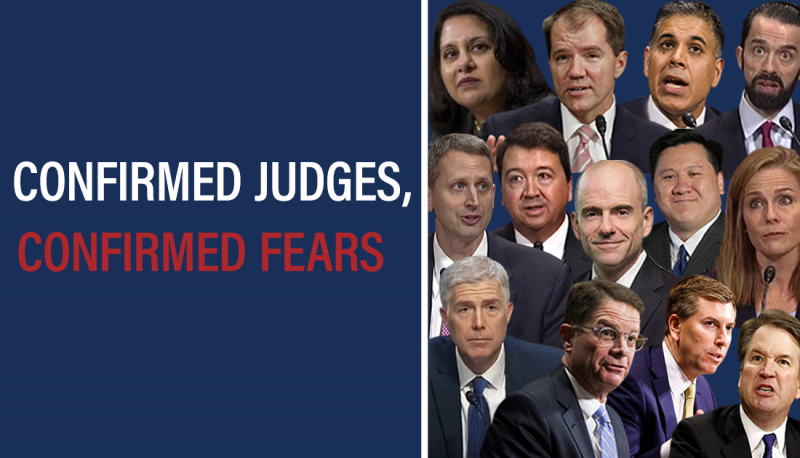 The federal appellate judges and Supreme Court justices Donald Trump is appointing are damaging our rights and liberties.

In the nearly three years since Donald Trump took office, he has nominated (and Senate Republicans have confirmed) two Supreme Court justices, 50 appellate court judges, and 120 district court judges to lifetime positions. Once on the bench, these judges have confirmed what many of us warned about when they were nominated: their narrow-minded, ideological extremism precludes their ability to be fair, just arbiters of the law.

PFAW’s Confirmed Judges, Confirmed Fears blog series has covered many Trump-appointed appellate judges’ and Supreme Court justices’ decisions* to demonstrate their impact on real people and real issues. And today, we’re thrilled to introduce a new interactive web tool that provides access to that information in a user-friendly, sortable way.

Our newly released Confirmed Judges, Confirmed Fears tool uses search tags to enable you to learn how Trump judges have ruled on the issues you care about and understand the impact those harmful decisions are having on our environment and our communities, including people of color, women, the LGBTQ+ community, working people, and consumers.

To learn more about any specific judge’s impact on a wide variety of issues, you can sort by that judge’s name on the left-hand column. You can also sort by issue to learn which Trump judges have issued bad decisions or dissents or have cast troubling votes that undermine our rights and protections in that area.

Using these search filters, you can learn, for example, how anti-choice Seventh Circuit Judge Amy Coney Barrett dissented from a ruling that upheld an injunction to a dangerous Indiana law that requires people under 18 to notify their parents before they have an abortion. You could also find that Fifth Circuit Judge Don Willett defended unfairly drawn state lines that extended the borders of a historically black district in Mississippi to include wealthy, predominantly white areas.

And in addition to illuminating Trump judges’ extreme views on pressing issues like abortion and voting rights, our tool also provides critical context about their ideas on presidential power – a particularly salient concern as impeachment proceedings against Trump continue to escalate – and on the Right’s broader goal to gut programs like Social Security and Medicare and shred critical laws that safeguard us from the outsize influence of big money and big business special interests.

For example, a search for rulings by Trump D.C. Circuit judge Neomi Rao yields a result in the Abuse of Government Authority category. Her dissent in that case indicates that she would have quashed a House committee’s subpoena into Trump’s financial records, arguing that the subpoena is a threat to presidential power, and that “allegations of illegal conduct against the President cannot be investigated by Congress except through impeachment.” But Rao’s dissent also reveals her distaste for the federal protections that have flowed from the New Deal, so that dissent will also produce a result in the Repealing the New Deal category.

In other appellate courts – and on the Supreme Court – Trump judges continue to illustrate that across a wide range of issues, they have consistently voted to roll back our rights and endanger our liberties from the court bench. We all need to fight back against the impact of Trump’s judicial takeover to restore fairness and justice to our courts. And as we head into a critical election year, this new resource enables you to collect the data you need to do just that. We encourage you to give it a try here!

*The Confirmed Judges, Confirmed Fears blog series and tool focus on divided decisions involving Trump justices and appeals court judges – decisions in which other judges, often including conservative Bush and Reagan appointees, have dissented from harmful rulings written or joined by Trump judges, or where Trump judges have dissented to try to push the law further to the right. We include cases in specific issue areas, but generally do not include unanimous decisions or cases outside these issue areas, or cases on specialized issues such as patents, trademarks, or (as of Jan. 2020), the U.S. Sentencing Guidelines.