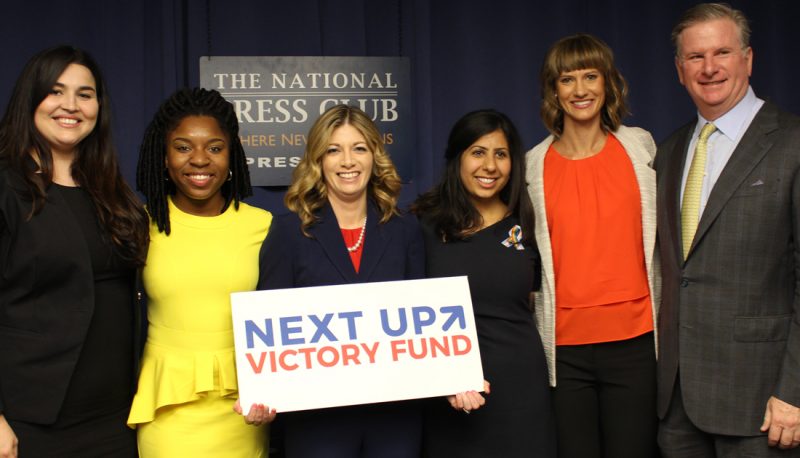 On July 24, PFAW’s Next Up Victory Fund hosted a panel at the National Press Club featuring four progressive women running for office to discuss the impact of the #MeToo movement on the political landscape, particularly under a president who has admitted to sexually harassing women.

? LIVE: We’re live at the National Press Club with Rachel Crooks for Ohio, the first woman to accuse Trump of sexual assault; Anna Vishkaee Eskamani, candidate for Florida State House; Katie Muth for PA Senate; and Myya Jones For State Representative District 4 to discuss the impact of the #MeToo movement on woman candidates, races, and the future of politics under a president with a record of discrediting women.

In his opening remarks, People For the American Way President Michael Keegan lauded the importance of lifting up the voices of young leaders running for elected office, and emphasized that the future of our country depends on supporting new leaders, especially in November when there is a chance to flip legislative seats. He also called attention to the recent surge of newly elected women in Virginia and women leading the way across the country.

In their opening remarks, Crooks and Muth both addressed their experiences with rape and sexual assault, and all four noted how pervasive sexism and sexual harassment is in the political landscape. They added that the #MeToo movement holds the promise of continuing to expose men who abuse their power, especially those in politics where money and connections garner influence. “When I saw that there were powerful men suffering consequences, yet we still shielded president Trump from any consequences or from being held accountable, that made me really angry and infuriated, and I thought we need to keep calling attention to this; we have a sexual predator in office, and that is not ok,” said Crooks. “We’re still shielding certain politicians when it’s expedient, and that’s not ok, so I’ll keep talking.”

Eskamani added that the #MeToo movement is building on generation upon generation of sexual assault survivors being forced to remain silent, and “it becomes ever more important and apparent that we have to present a path forward as candidates where people can live a life free from abuse and control, and especially for women and girls.”

Even before the onset of the #MeToo movement, they shared, each had long been aware of the barriers women face and of the ubiquitous abuses of power they would encounter regardless of their profession. Jones has been heavily involved in community and campus organizing around sexual assault prevention and racial justice, and now she’s running for office to give a voice to untold stories because “if you don’t have a name or you don’t have money or power, your story will not be heard.”

“If you’re Black, if you’re a woman, and you feel like you haven’t been heard, I hear you. I believe you. Keep telling your truth.” –@MyyaJones #MeToo #Election2018 #TimesUp #RunMyyasVote #TrustBlackWomen #NextUp2018 #Myya4StateRep pic.twitter.com/s0fFi0Pe9h

Muth worked in sports medicine, a predominantly male field in which women are viewed more as distractions than as assets.  Muth asserted that women often aren’t believed or respected and that this needs to change. She said, “For too long, we survivors have been shamed into silence. But Donald Trump’s campaign brought up all of this trauma we had tried to suppress, and we realized we need to speak out instead of being silent.”

All four women said that Trump’s election galvanized them to run for office to fight for more representation for women in politics, and they discussed their shared experiences of the backlash that followed their attempts to shake up the status quo. They agreed that resistance to their candidacy must be met with more women speaking their truth and challenging men in power.

Ocampo encouraged people to donate to, volunteer for and raise their voices in support of the incredible progressive women across the country who are working towards a better world for all marginalized people. She finished, “We want to help candidates win who look like America and this is the best of America right here.”

Thank you to one of our DC friends who sent me this pic of yesterday’s #MeToo⁠ ⁠ panel being covered by the print version of @politico! There is power in our stories, and we will not be silenced. #TimesUp⁠ ⁠ #sayfie #flapol @peoplefor pic.twitter.com/Opaff4ig6d