Norman Lear: Why I'm a Man for Choice - People For the American Way
Skip to main content

Norman Lear: Why I’m a Man for Choice 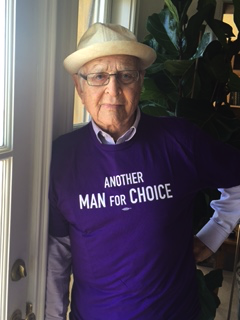 More than forty years ago, the writers and I on our TV show "Maude" did something which apparently no one had done before on television: We showed our main character making the decision to have an abortion.

This was 1972, the year before the Supreme Court affirmed the right for all women to make their own reproductive health-care decisions. Back then, abortion wasn't something that was being discussed on television. But, of course, millions of women, and men, and families were discussing it in their own homes. So, we wrote some episodes that included Maude's discovery that, at age 47, after her daughter was grown, she found herself pregnant. We explored her conversations with friends and family about that pregnancy, and her ultimate decision with her husband to end that pregnancy. To no one's surprise, the world continued to turn on its axis.

As with our character, Maude Findlay, the majority of women who have an abortion today are already mothers, and don't make the decision lightly. At that time, a woman's ability to make the decision to create or expand her family was dependent on the state she lived in and how much money was in her bank account.

I never would have thought that, more than 40 years later, we would still be waging these same fights over women's reproductive rights that we were facing in the 1970s.

Yet, in June, the Supreme Court will decide the most consequential abortion case in decades involving a Texas law that could force the closure of abortion clinics in the state.

As America celebrates Women's History Month this March, we recognize the incredible strides our country has been able to make because of the hard work, creativity and resolve of American women. Our country is stronger when all Americans are empowered to make their own decisions about their health, their bodies and whether to start and grow their families.

It is unfortunate that, in this heated political season, we are still debating whether women have the right to make decisions about their own bodies. Seven in 10 Americans support a woman's right to an abortion. Congress and state legislatures should be following the will of the people and get out of the way.

Instead, states from Texas to Mississippi to Ohio are leaving millions of women without access to health-care clinics that provide the reproductive healthcare services they deserve. Women – particularly poor women, women of color, and those living in red states – are losing access to their constitutional right to abortion at a frightening pace.

The very same politicians who are closing clinics in the name of protecting women and families are actively harming them by cutting off funding for preventative health care, cancer screenings and HIV prevention as part of an ideological war against abortion. Putting up barriers to accessing health care is not the way to support and empower women in this country.

But really, this is not about abortion for the anti-choice movement. Cutting off access to health care is one tool in their playbook that pushes a worldview where women are kept out of positions of power.

We know that one in three women in the United States will have an abortion in their lifetime. Most women who choose to have an abortion are in their twenties — the same decade in which their careers are just starting to take off. By depriving a woman of her right to an abortion, we're boxing her into a world where she cannot choose her own destiny, take advantage of the career opportunities she wants, or simply live the life that's best for her and her family.

If we trust women to run businesses, fight for our country, raise children, and hold the highest political offices (and we all should), we need to also trust that they are capable of making their own decisions about what is best for their own body, family and future. When the anti-choice movement doesn't trust women to make these personal decisions, we can only assume they don't trust women to lead either.

I am proud to stand with NARAL Pro-Choice America and call myself a "Man for Choice" because I believe it is time for men to stop pretending that we know better what women's health-care needs are. Women have proven that they are up to any task set before them and are more than capable of deciding their own futures. We can't afford to wait another 40 years before politicians figure this out.