Oh, What a Week - People For the American Way
Skip to main content

Oh, What a Week 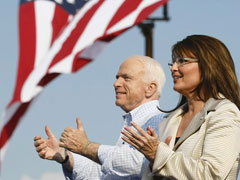 By the end of the Democratic National Convention last week my feet were aching but my spirit was soaring. I loved meeting People For members, and had a chance to connect with a lot of progressive advocates, political leaders, and potential donors. Our standing-room-only panel on the future of the Supreme Court was thoughtful and lively. Several of our staff did magnificent jobs in other panel discussions throughout the week. And the whole event felt like history in the making.

I hadn’t even gotten home when the afterglow was interrupted by the announcement on Friday that John McCain had selected Sarah Palin, the governor of Alaska, to be his running mate. Like many others, we’ve been busy since then looking at her record, and when it comes to the issues we care about, it’s not pretty.

Let me state clearly that I have spent my whole career working to give women the opportunity to take leadership roles. I am opposed to the media or anyone else judging women candidates on their hair, hemlines, or anything other than their policies, positions, and qualifications. I agree with Sen. Barack Obama that this campaign should not be about Palin’s children, and as a mother, I appreciate that at least from the outside it appears that her teenage daughter is getting support at a difficult time.

In other words, let’s judge Palin on her political positions and her record — and let’s judge John McCain based on this important decision. Here’s some of what we know already, with more coming out by the hour:

Sarah Palin has proven that she knows how to win local and statewide elections, and I encourage progressives not to take her too lightly or dismissively. Given what we’re learning about her record and political beliefs, there’s plenty of reason to question her selection by McCain, and to remind Americans what their election would mean for the future of the Supreme Court and for our rights and liberties. With your help, that’s what we’re going to do.

Let me know what you think at Kathryn@pfaw.org.