Yesterday, Republicans filibustered the nomination of former GOP senator Chuck Hagel to be Secretary of Defense.

Democrats voted unanimously to allow a vote on the nomination, but only four Republicans were willing to join them, bringing them to 59 votes–one vote away from achieving the three-fifths majority they needed to end the filibuster*. 39 Republicans voted “No” and one, David Vitter, missed the vote.

But that only brings us to 99.

The outlier is Utah Senator Orrin Hatch, who voted “present” on the motion. And while no one else in the Senate routinely uses “present” votes on cloture motions, Hatch has repeatedly done just that on cloture votes for President Obama’s nominees. 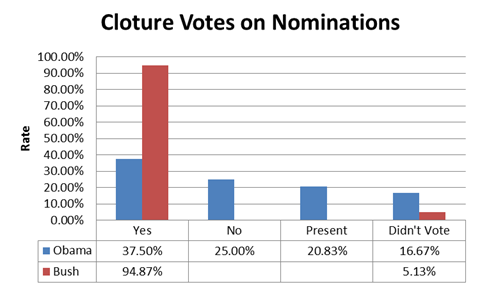 That’s not how Hatch describes it. In response to his decision to vote “present” on the motion to end the filibuster of judicial nominee Jack McConnell, Hatch dissembled: “I  opposed the nominee, but I didn’t want to vote against cloture.” In fact, on judicial nominees in particular, he seems to be trying to maintain a talking point (“I didn’t vote against cloture.”) while routinely working to block up or down votes on confirmation: he pulled the same maneuver several months later to help block another nomination, but has never actually cast a “no” vote cloture for a judicial nominee.

It’s not surprising that Hatch is eager to insist that he’s never voted against cloture of a judicial nominee. After all, in 2005 Senator Hatch insisted that filibustering judicial nominees is “unfair, dangerous, partisan, and unconstitutional.”

But for all the smoke and mirrors, no one should buy the ruse. Orrin Hatch is exhibit A in the abuse of Senate rules to block President Obama’s nominees. That should count as unfair, dangerous and partisan behavior in anyone’s book, and probably dishonest too.

* – Majority Leader Harry Reid switched his vote from yes to no for procedural reasons once it became clear the cloture motion would fail.

THE HILL: Despite Senate setbacks, the fight for voting rights is far from over