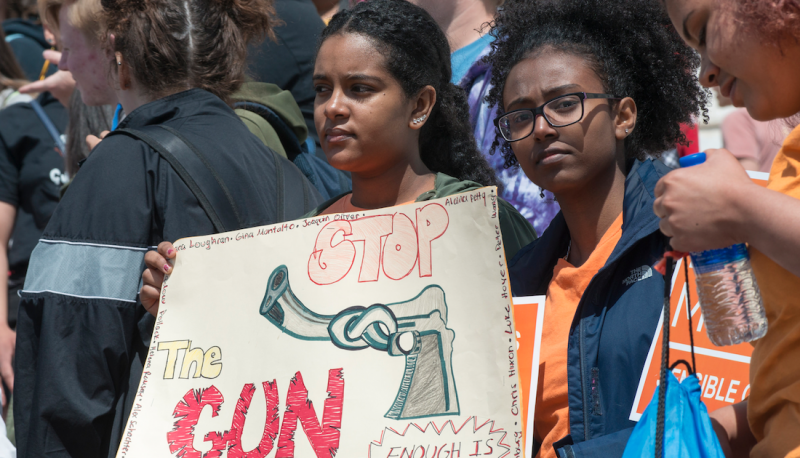 The Progressive Happy Hour: The Fight for Gun Violence Prevention

While People For the American Way and PFAW’s African American Ministers In Action believe that the so-called “Dickey Amendment” should ultimately be repealed, we also believe that the federal government can work within current law to research the causes, effects, and evidence-based prevention of gun violence in our communities. On March 26, PFAW and AAMIA joined allied organizations on a letter to House and Senate leaders that calls for gun violence research to be funded under the Centers for Disease Control and the National Institutes of Health in the coming fiscal year. You can download our letter here.

The epidemic of gun violence is one of the leading causes of premature death in the United States. Each day, more than 250 people are injured due to a firearm, and of that group, more than 96 people are killed. Gun violence affects not only the individuals who are physically wounded by a bullet, but the effects cascade outward and harm the economic, educational and health related outcomes of friends, families and whole communities. Far too many communities have been impacted by horrific acts of mass violence that grip the nation’s attention, while untold numbers of neighborhoods quietly suffer a daily toll of gun violence that never makes national headlines.

This violence is unacceptable. And it is not inevitable. Gun violence poses a significant threat to the public’s health and safety and now is the time to act to address it. As advocates working to prevent gun violence, we urge Congress to appropriate 50 million dollars in the FY 2020 budget specifically for the Centers for Disease Control & Prevention and National Institutes of Health to fund gun violence research.

It’s up to Congress to fund lifesaving research into America’s gun violence problem. Health and Human Services Secretary Alex Azar has acknowledged the CDC is not restricted from conducting this research, and CDC Director Robert Redfield has said his agency is prepared to do this research if it receives congressional funding. It’s Congress’s responsibility to the American people to allocate this money.

Gun violence research cannot wait. Gun violence research is severely underfunded and is estimated to receive less than 2% of the funding needed to adequately address the scope of the issue. Because of the insufficient amount of federally-funded research over the past 20 years, there is a severe deficit of information relating to the causes of gun violence and most effective prevention methods. Our premier institutions of public health—the Centers for Disease Control and Prevention (CDC) and the National Institutes of Health (NIH)—have made significant progress in researching effective public health approaches to reducing death and injury from deadly automobile accidents, infectious diseases, food contamination and other seemingly intractable health challenges. Research can do the same for gun violence. It must—our lives depend on it.

In 2017, gun deaths reached a 40-year high. Gun violence is a public health crisis that devastates our communities every day. Congress should act quickly appropriate this funding and take a critical first step in addressing the scourge of gun violence and making our children, communities and country safer.