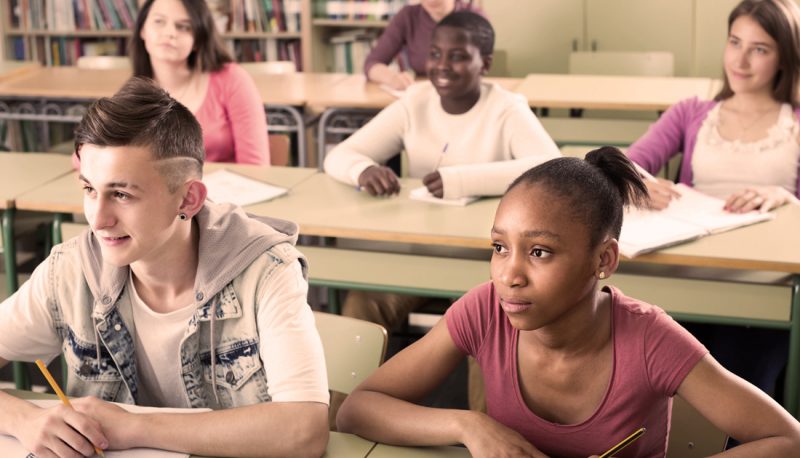 Following troubling moves on sexual violence, student loans, and transgender students’ civil rights—just to name a few—reports suggest that U.S. Secretary of Education Betsy DeVos has set her sights on school discipline and special education. In 2014, the Obama administration issued guidance on administering discrimination-free discipline in schools. They followed that in 2016 with a new regulation for collecting data on disparities in the identification, placement, and discipline of special education students. Now in 2017 Secretary DeVos is making moves to turn the clock back. People For the American Way and PFAW’s African American Ministers In Action joined allied organizations to hold Secretary DeVos accountable on racial justice for all students. You can read our letters in full below.

On November 17, 2017, you met with a handful of teachers and organizations to hear their experiences with the previous administration’s guidance on reducing discipline disparities in our schools. As reported in several news outlets, we understand that this meeting was part of a broader review of 2014’s “Dear colleague” letter and other civil rights protections. We are worried that this administration will rescind this guidance that is aimed to end disproportionate discipline, so that all students can enjoy educational opportunity. These include students with disabilities, boys and girls of color, English learners, and Native American, low-income, and LGBTQ students. To this end, we call on the U.S. Department of Education to support students of all backgrounds and abilities by keeping the school discipline guidance released by the Departments of Education and Justice in 2014.

We recognize that a negative school climate, overly punitive discipline policies, and a lack of focus on supporting the whole child can keep our students from reaching their full potential. Student data from the Civil Rights Data Collection also tells us that suspended, arrested, or expelled students are disproportionately students of color. We have seen ﬁrsthand how exclusionary practices negatively impact students’ trajectories and feed the school-to-prison pipeline. Once suspended or expelled, students are more likely to drop out of school and be incarcerated. Students should be in class, not handcuffs.

The federal guidance from 2014’s “Dear colleague” letter was formulated in response to our students’ struggles for equitable disciplinary practices and path to academic success. This federal guidance remains essential for holding our school systems accountable at the local level and for keeping this issue at the center of the national dialogue so that communities can work together to create solutions that bring an end to racial and discipline disparities and provide support so that all students can succeed in our nation.

We urge you to keep the school discipline guidance released in 2014.

All students deserve a Department of Education that will stand up for policies that improve their educational experience and lead to their long-term success.

On behalf of The Leadership Conference on Civil and Human Rights and the 112 undersigned organizations, we write to offer our strong support for the robust enforcement of the Individuals with Disabilities Education Act (IDEA) provisions regarding significant disproportionality in the identification, placement, and discipline of students with disabilities with regard to race and ethnicity.i This issue is of particular interest to the civil and human rights community given our long struggle to ensure educational opportunity, full inclusion, and appropriate supports and services for children with disabilities, boys and girls of color, English learners, and Native American, low-income, and LGBTQ students. We recognize that often students are members of multiple communities and experience unlawful and unjust discrimination within the intersections of these identities. We are committed to the robust enforcement of our nation’s civil rights and education laws and the freedom from discrimination and access to educational opportunity that they provide.

As parents, students, and advocates working to eliminate discriminatory practices that undermine equal educational opportunity, we know all too well that students of color are disproportionately misidentified for certain categories of special education, placed in restrictive learning environments at higher rates than their White peers with disabilities (where their outcomes are significantly worse than those of other students), and subjected to punitive discipline practices more often.ii We wholeheartedly support the collection of data on significant disproportionality, as it is an essential state obligation as required by the Individuals with Disabilities Education Improvement Actiii signed on December 3, 2004, and clarified by the regulations finalized on December 19, 2016.iv Moreover, we recognize that these data, once collected, should inform action to address systemic barriers to students’ success.

As you know, Politico published a draft Federal Register notice on October 26 seeking comment on whether to delay the compliance date for the 2016 regulation until July 1, 2020 (and postpone data collection regarding the rights of the youngest children until 2022).v This notice suggests that the Department may be considering delaying or amending this important rule. We are reaching out to you, as advocates for children and their families, to express our continued support of the regulation that implements the IDEA’s significant disproportionality requirements and our opposition to any effort to delay implementation of this regulation.

This regulation was a direct response to the February 2013 U.S. Government Accountability Office (GAO) studyvi showing widespread noncompliance by states with 20 U.S.C. Section 1418(d) of the IDEA requiring states to identify Local Education Agencies (LEAs) with significant disproportionality in areas related to special education: Identification; Restrictive Placement; and Discipline. Most states set thresholds for identifying disproportionate districts so high that no districts ever exceeded them, and, therefore, none were identified. Meanwhile states permitted districts to suspend students of color with disabilities at much higher levels than their White peers. Nationally, for example, in 2011, districts suspended more than one in every four Black students with disabilities, at least once. Rates of disciplinary removal for their disabled White peers were far lower.vii The GAO recommended that, “To promote consistency in determining which districts need to provide early intervening services, Education should develop a standard approach for defining significant disproportionality to be used by all states.”

During a request for public comment published in the Federal Register on June 19, 2014 on the actions that the Department should take to address significant disproportionality and following a notice of proposed rulemaking published on March 2, 2016, hundreds of individuals and organizations, including many signers of this letter, school district officials, and other stakeholders, weighed in on the appropriateness of a regulation to implement section 618(d) of the Individuals with Disabilities Education Act.  The Department of Education published a final rule in the Federal Register on December 19, 2016.

In sum, numerous stakeholders representing a variety of constituents have taken the time to provide their thoughtful input to the Department, and their comments remain available for review. The statutory significant disproportionality requirement has been the law for 13 years, and states have adequate time to develop appropriate measures for determining racial and ethnic disparities in special education. The regulation was promulgated in December 2016; as such, the field should now be prepared to use its methodology in meeting their ongoing obligations under the IDEA. Further delay and review serves no meaningful purpose and will only result in harm to children and confusion and wasted resources on the part of the federal and state departments of education and school districts.

We stand committed to justice for children, enforcement of our laws, and equal access to educational opportunity in our nation’s public schools. For any questions or for additional information, please contact Liz King, Leadership Conference Director of Education Policy at king@civilrights.org or (202) 466-0087 or Diane Smith Howard, National Disability Rights Network Senior Staff Attorney for Juvenile Justice and Education Issues at diane.smithhoward@ndrn.org or (207) 522-2871.