PFAW and AAMIA: Unpaid, Unprotected Days Off Have Stark Consequences for Working Families and Domestic Violence Survivors - People For the American Way
Skip to main content

As part of our efforts to promote gender equity, People For the American Way and PFAW’s African American Ministers In Action are supporting the Healthy Families Act. This legislation would not only guarantee paid sick days that can be used to address a range of personal and family health concerns, but it would also create paid safe days for domestic violence survivors. You can download the latest coalition letter here.

We, the undersigned organizations, urge you to cosponsor and advocate for swift consideration of the Healthy Families Act, which would create a national paid sick and safe days standard.

The Healthy Families Act would guarantee working people the ability to earn up to seven paid sick days a year to recover from short-term illnesses, access preventive care, care for a sick family member or seek assistance related to domestic violence, sexual assault or stalking. Without paid sick days, workers are forced to make impossible choices when illness strikes: stay home, lose pay and risk their jobs; or go to work sick, jeopardize their health and spread illness to their co-workers and communities. Paid sick and safe days help keep families financially secure, workplaces and communities healthy and productive, and businesses and the economy strong. 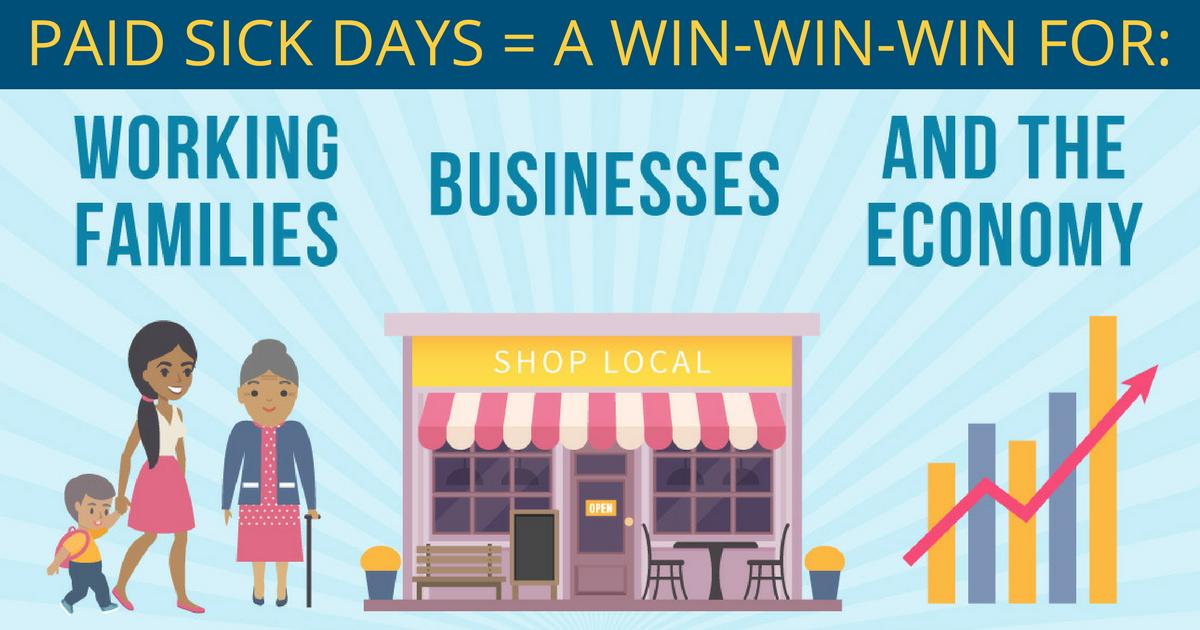 Ten states and 22 jurisdictions have or will soon have paid sick days laws in place in the United States.1 These laws currently protect nearly 41 million workers2 and have helped increase the share of private sector workers with access to paid sick days by 10 percentage points since 2015.3 A strong, growing body of evidence from jurisdictions that have had laws in place for years shows that paid sick days benefit workers and families. These studies also show virtually no adverse effects—and some positive effects—on businesses and local economies.4

Despite substantial increases in access to paid sick days as a result of new laws, nearly one-third of the private sector workforce in the United States—at least 34 million people—cannot earn paid sick days to use when they get sick.5 Millions more cannot earn time to care for a sick child or family member.6 Lower-wage workers, workers of color and hourly workers are least likely to have access to paid sick time.7

Unpaid, unprotected days off have stark consequences for working families. For a family without paid sick days, just 3.3 days of lost pay due to illness are equivalent to an entire month of health care, on average, and 4.5 days are equivalent to an entire month of food.8 Nearly one-quarter of U.S. adults (23 percent) report they have lost a job or have been threatened with job loss for taking time off work due to illness or to care for a sick child or relative.9

Paid sick days make business and economic sense. When sick workers are able to stay home, the spread of disease slows and workplaces are both healthier and more productive. Paid sick days also reduce “presenteeism,” the productivity lost when employees work sick, which is estimated to cost our national economy approximately $227.9 billion annually (after adjusting for inflation) and surpasses the cost of absenteeism.10 Paid sick days also reduce workplace injuries: Workers who earn paid sick days are 28 percent less likely than workers who don’t earn paid sick days to be injured on the job—with an even greater difference among workers in high-risk occupations.11

Grave public health consequences can result when workers do not have paid sick days. Workers in jobs that require frequent contact with the public, including those in food preparation and service, personal home care and child care, are among the least likely to have paid sick days and the most likely to be unable to afford to take an unpaid day away from work.12 Without paid sick days, workers are forced to take unpaid leave or work sick. Workers without paid sick days are more likely to report going to work with a contagious illness like the flu.13 This puts workers, customers and businesses in danger.

Paid sick days enable working parents to care for their children when they are sick—shortening recovery time and reducing community contagion. Parents without paid sick days are nearly twice as likely as parents with paid sick days to send a sick child to school or day care.19 When parents have no choice but to do so, children’s health and educational attainment is put at risk—as is the health of classmates, teachers, school staff and child care providers.

Women are disproportionately affected by the nation’s lack of paid sick days, which jeopardizes the economic stability of families increasingly dependent on women’s wages. Women make up nearly half the workforce20 and nearly two-thirds of U.S. mothers are breadwinners or co-breadwinners for their families.21 Yet, overwhelmingly, mothers still have primary responsibility for selecting their children’s doctors, accompanying children to appointments and getting them recommended care.22 In 2014, nearly four in 10 employed mothers (39 percent) said they alone must miss work when a sick child needs to stay home, compared to 3 percent of working fathers. Among these mothers, 60 percent were not paid when they take that time, up significantly from 45 percent in 2004.23

Like paid sick days, paid “safe” days are critical for workers’ productivity, security and well-being. In a 2018 survey of domestic violence survivors, nearly three-fourths (73 percent) reported that financial problems forced them to remain with their abusers longer than they wanted or to return after having left, and more than half (53 percent) said they lost a job because of the abuse.24 Because survivors of domestic violence are at increased risk of harm during and shortly after separating from an abusive partner,25 it is essential that they be able to find shelter, file restraining orders, attend court dates or receive counseling to prevent further abuse and continue working.

The Healthy Families Act would strengthen workers and families, businesses and the economy. It would guarantee workers across the country the right to earn paid sick and safe days no matter where they live, bringing the rest of the United States in line with the states and cities that have passed these laws and much of the rest of the world.

We urge you to demonstrate your strong commitment to our nation’s working families by cosponsoring the Healthy Families Act and advocating for swift consideration. Thank you.