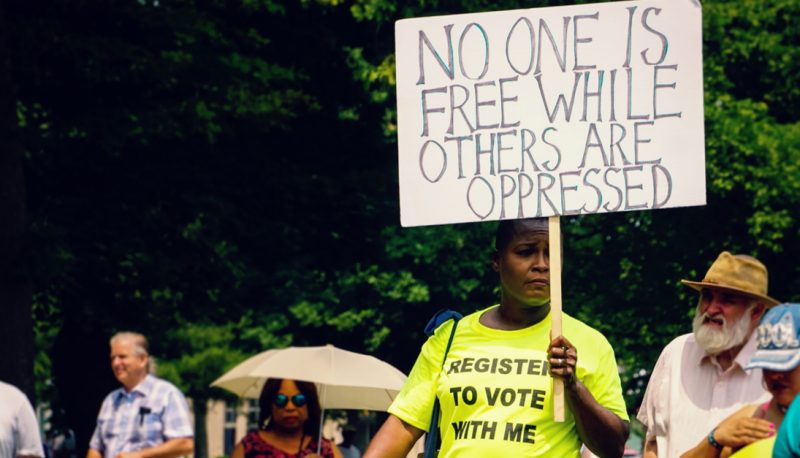 People For the American Way and PFAW’s African American Ministers In Action are continuing their push for Congress to pass the For the People Act as a strong and holistic package. In advance of an expected House floor vote the week of March 4, PFAW, AAMIA, and fellow members of the Declaration for American Democracy coalition sent a letter to House members urging them to vote in favor of the bill and against any weakening amendments or motions to recommit. You can download our letter here.

We write as members of the Declaration for American Democracy coalition to strongly urge you to vote for H.R. 1, the “For the People Act of 2019,” and to vote against any weakening amendment and against any motion to recommit to weaken or remove any provision in the bill.

Our political system is dangerously broken and the American people know it. They are deeply concerned about the rigged system in Washington that benefits wealthy individuals and powerful special interests at the great expense of more than 300 million Americans.

H.R. 1 is a holistic approach to repairing the rules of our democracy. The legislation provides essential solutions to:

Spurious and misleading arguments are being made against H.R. 1 by opponents who want to keep in place the unjustifiable status quo. These arguments should be recognized for what they are: desperate efforts to prevent the House from taking effective action to repair our political system, revitalize our democracy and help fulfill the promise democracy envisions for our country.

We are at a crisis moment when our democracy is under grave threats from actors at home and abroad, and citizen confidence in Congress has reached dangerously low levels. Your votes on H.R. 1 are of historic consequence.

The American people and our organizations will be watching your votes on H.R. 1, including the motion to recommit, which will be judged by history.

Our organizations strongly urge you to vote for H.R. 1 and to vote against any weakening amendment and against any motion to recommit to weaken or remove any provision in the bill.