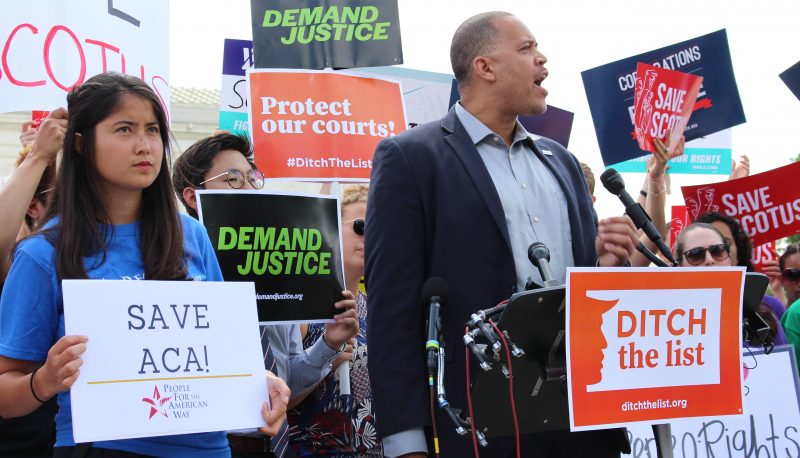 The day after Justice Kennedy announced his retirement from the Supreme Court, People For the American Way and civil rights allies rallied together outside the Supreme Court. PFAW and allied organizations including Alliance for Justice, the Center for American Progress, NARAL, Demand Justice, and Lambda Legal called on the Senate to protect our rights and refuse to rubber stamp a Trump nominee. The appointment of a justice from Donald Trump’s previously released list of nominees to the Court would enable a dangerous and extreme agenda that would curb critical civil liberties and protections.

Justice Kennedy, while he had a mixed record on women’s reproductive rights did remain committed to Roe v. Wade’s core holding that access to abortion is a constitutionally protected right. He authored the Court’s narrow 5-4 ruling that insured the constitutional rights of same-sex couples to marry. And he also provided a critical fifth vote at times on the environment, civil rights, prison reform and checking presidential power. Kennedy’s retirement means that many of these important civil rights protections are in danger of being reversed—marriage equality and the right to abortion in the United States are in grave danger. Trump, if unchecked, will appoint a narrow-minded elitist that will prioritizes the interests of the powerful and wealthy over all Americans.

At the rally, PFAW Senior Director of Outreach and Public Engagement Diallo Brooks emphasized that our courts must be filled with fair-minded justices and that the American people will not bow to Trump’s tyranny and allow the appointment of nominees that do not represent American values. He demanded that the Senate do its job, stand up for the American people and defend our constitutional rights.

The fight for equal justice for ALL Americans – not just the rich and powerful – has only just begun. Watch live: https://t.co/nmuyzd5gjQ

PFAW has been working tirelessly to stop Trump’s unqualified lower court nominees and it will do the same for the Supreme Court. We will continuously bring our fight to Congress to make sure the Senate Judiciary Committee does the right thing and doesn’t rubber stamp another dangerous Trump nominee.