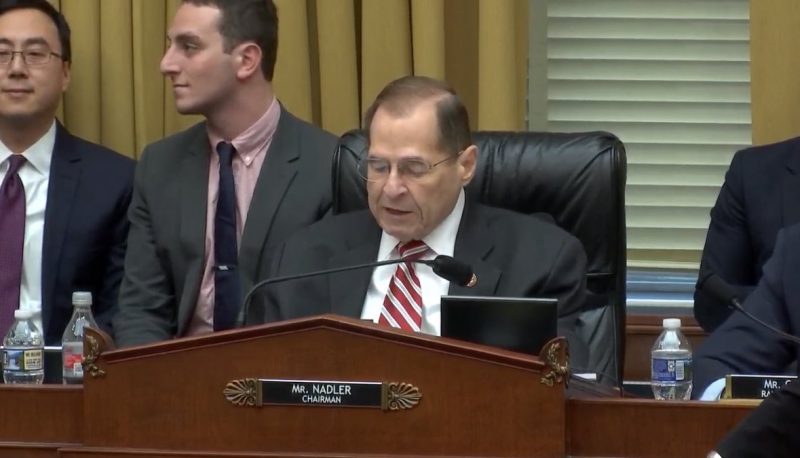 Rep. Jerrold Nadler, D-N.Y., emphasizes during the House Judiciary Committee hearing on the For the People Act that President Trump has helped to spread conspiracy theories about voter fraud.

People For the American Way and our fellow members of the Declaration for American Democracy coalition are united in a firm commitment to building a democracy where everyone participates, every vote is counted, voting rights are fully enforced, and everyone’s voices are heard. Accordingly, we believe that the House should seize this historic moment and quickly advance the For the People Act as a strong and holistic package. On January 29, the House Judiciary Committee held a hearing on the bill. Our letter:

Our organizations represent a diverse set of interests and have differing mandates and areas of focus, but we coalesce together around a shared goal of swiftly advancing the For the People Act, H.R. 1, as a bold and comprehensive package. We welcome the opportunity to offer our support before this committee.

We are members of the Declaration for American Democracy coalition, which seeks fundamental democracy reforms to create a government that is reflective, responsive and accountable. Our organizations applaud the committee for quickly turning its attention to this landmark legislation.

We believe it is essential for the House to act quickly to pass bold democracy reforms and to demonstrate a holistic approach in addressing a series of fundamental problems facing our democracy. We also believe the House must ensure that H.R. 1 is not weakened or divided in the process, and that it pass as a strong, comprehensive package of reforms.

H.R.1 includes reforms essential to fixing our political system, including voting rights, money in politics, redistricting, and government ethics reforms. These reforms are interdependent on one another and must be addressed holistically if we are to truly address the threats to democracy.

Further, passing H.R. 1 as a bold and comprehensive package as the first order of business unlocks further potential to advance other legislative items in the session. By demonstrating that creating a democracy that is inclusive of and responsive to every American is the top priority, the House can help to shore up support for subsequent reforms.

A Wall Street Journal/NBC News poll1 in advance of the 2018 midterm elections found that 77 percent of surveyed registered voters agreed that “Reducing the influence of special interests and corruption in Washington” is either the most important or a very important issue facing the country.

This was reflected by the views of 47 newly-elected Members who were among 107 Democratic challengers to write2 during the campaign urging that sweeping reforms “be the very first item Congress addresses.” Many successful midterm campaigns centered the importance of bold democracy reforms, and voters who ushered in the new Congress now expect that the House deliver on those promises.

The American people know that Washington is not representing their best interests when millions of eligible voters cannot vote because they are not properly registered, when voting laws are used to disenfranchise millions of Americans, and when citizens are improperly purged from voter rolls. They recognize that specific communities are disproportionately targeted for voter suppression, including young people, communities of color, and LGBTQ+ individuals.

The American people know that Washington is not representing their best interests when wealthy Americans give huge contributions to Super PACs and dark money groups to influence our elections and to buy influence over government policies, at the great expense of ordinary Americans who are not empowered in the political process.

The American people know that Washington is not representing their best interests when congressional districts are drawn to achieve highly partisan results at the expense of fair representation—when representatives choose their voters rather than voters choosing their representatives.

The American people know that Washington is not representing their best interests when government ethics rules have major flaws that allow public office to be used for private gain, when they permit there to be a revolving door between government positions and private interests and when ethics rules are not subject to proper oversight and enforcement.

And the American people know that these problems result in a rigged system in Washington that is blocking substantive policies of great importance to ordinary Americans, such as more affordable health care, lower prescription drug prices, a fairer tax system and the like.

We call on you to quickly advance H.R. 1 as a strong and holistic package.

The 116th Congress has a historic opportunity to repair our broken political system and strengthen the integrity of our democracy, and we strongly urge the House to seize this moment.