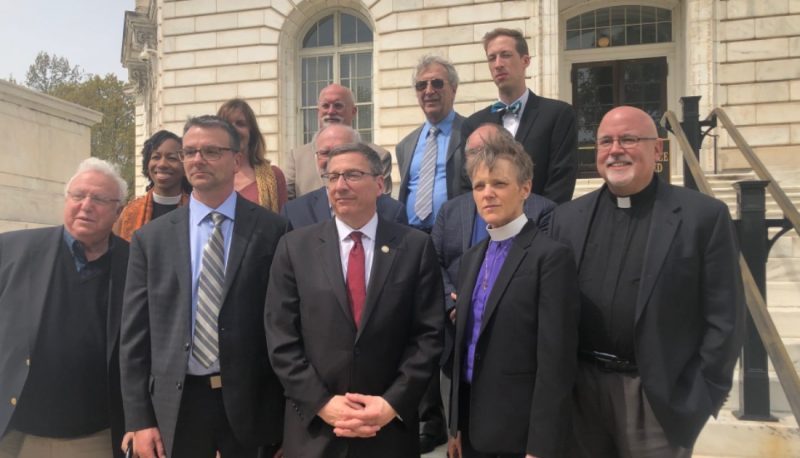 Coalition of Conservative and Liberal Gun Leaders Against Gun Reform

On April 17, PFAW joined the Coalition of Conservative and Liberal Church Leaders in urging Congress to pass commonsense gun violence prevention legislation. The epidemic of gun violence is one of the leading causes of premature death in the United States. Each day, more than 250 people are injured due to a firearm, and of that group, more than 96 people are killed. To combat this tragedy, a group of clergy and community leaders formed the Coalition of Conservative and Liberal Church Leaders. Many members hold vastly different political ideologies, but their aim is to find bipartisan support for reform by focusing on small components of the problem.

Michael Austin: “It is a moral imperative… We’ve got to do something and we can do something.” #GunReform #Columbine pic.twitter.com/6ZoNLAVFS7

The group spent most of the day visiting various members of Congress, including Senate Majority Leader Mitch McConnell, R-Ky., to encourage the passage of legislation that would require universal background checks for all gun owners. Although legislation of this kind has been introduced in the past, Republicans have repeatedly blocked these efforts.

Heidi Cortez, Columbine Survivor: “When Columbine happened it was a shock to the nation. Now we see mass shootings as a common occurance.” #GunReform #Columbine pic.twitter.com/00fqrtYSA8

The first speaker was Reverend Robert Schenck, the president of the Dietrich Bonhoeffer Institute, who ministers to elected officials in D.C. He introduced certain members of the group and explained why they have joined together to fight this epidemic. He stated that lawmakers have a moral obligation to protect their constituents and suggested that there are several solutions already available that could potentially save thousands. The next speaker, Heidi Cortez, is a Columbine survivor who still suffers from severe PTSD. She observed how Columbine shocked the nation at the time, but 20 years later school shootings have become an all too common occurrence in our society.

Reverend Schenck: “Senators must use the power of their offices to protect women, children, and men against the bullets that might kill them.” #GunReform #Columbine pic.twitter.com/c9ierSAxmJ

Reverend Mary Anne Buddy discussed the decrease in incidents of gun violence in states where measures like universal background checks were implemented, rejecting the premise that there is not enough evidence yet to pass major reform. Finally, Reverend Patrick Mahoney ended the press conference by stating that “[e]vidence is clear that red flag laws and universal background checks save lives.” He urged Congress to act now, before another shooting occurs.