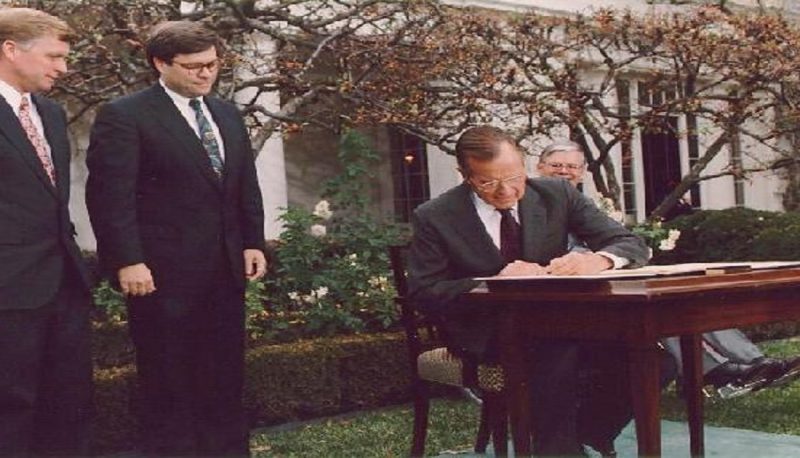 The Progressive Happy Hour: Catching Up On the Mueller Investigation

After having announced his intended attorney general nomination in December, President Trump formally submitted William Barr for the Senate’s consideration on January 3. The Senate Judiciary Committee is expected to hold Barr’s hearing on January 15. People For the American Way wrote to committee members to express our opposition to the Barr nomination. You can download our letter here. Previously, PFAW joined civil rights allies in expressing serious concerns about Barr.

On behalf of our hundreds of thousands of members and activists throughout the United States, People For the American Way writes to express our opposition to the nomination of William Barr to be attorney general.

Perhaps no member of the executive branch has a greater role than the attorney general in ensuring justice, equality, and the rule of law, without which our democracy would perish and our civil rights would disappear. And few if any presidents have tested our nation’s democratic norms more than the one who has nominated Barr.

President Trump has treated the federal government as a weapon to use against his political opponents. He has tried to sabotage the legal processes that are investigating possible collaboration with a foreign enemy’s successful plot to get him elected. He has also distorted the law or ignored it altogether in order to strip millions of people of the rights set forth in our Constitution and in our civil rights statutes.

As a result of President Trump’s widely recognized assaults on the rule of law, almost anyone he nominates for attorney general at this point in his presidency would automatically raise substantial concerns. Unfortunately, Barr’s record does not assuage those concerns, but exacerbates them.

If protecting Trump from that investigation was already a make-or-break criterion just a few weeks after the election, one can only imagine the importance Trump places on this two years later, with so much more now known about him, his family, and his company’s apparent unlawful activities. William Barr’s strident opposition to the Mueller investigation suggests that he may meet the president’s illegitimate criterion.

Three days after Trump fired FBI Director James Comey in the spring of 2017, Barr wrote a scathing op-ed sharply attacking his former colleague and praising Trump for firing him.ii That same spring, Trump met with Barr to discuss hiring him as his personal defense counsel in the investigation—one he would now oversee if confirmed.iii Barr is reported to have turned the job down, choosing to have no apparent professional interest or role in the special counsel’s work.

Yet a year later, he sent—unsolicited—a detailed, 19-page legal memorandum directly to Deputy Attorney General Rod Rosenstein and Assistant Attorney General Steve Engel arguing that Mueller had no legal authority to “demand that the President submit to interrogation about alleged obstruction.” Claiming that he was “deeply concerned” about the lawfulness of the special counsel’s investigation, Barr urged the DOJ officials overseeing Mueller “not to veer into novel, unsettled or contested areas of the law; and not to indulge the fancies by overly-zealous prosecutors.”

And now Trump wants him to be attorney general. It would be impossible for Barr to supervise the special counsel’s work without at least a strong appearance of bias. The American people deserve integrity in the highest level of law enforcement, which cannot be present unless Barr were to recuse himself.

Moreover, Barr’s memo sets forth an overarching view of executive authority that is simply inconsistent with the rule of law. He believes that Trump cannot be questioned for firing Comey in a criminal obstruction probe because presidents always have the discretion to fire an FBI director:

[D]efining facially-lawful exercises of Executive discretion as potential crimes, based solely on subjective motive, would violate Article II of the Constitution by impermissibly burdening the exercise of core discretionary powers within the Executive branch.

[T]he President’s exercise of its Constitutional discretion is not subject to review for ‘improper motivations’ by lesser officials or by the courts.iv

Barr’s dangerously expansive view of executive authority dates back at least to his work in the George H. W. Bush administration. In 1989, while in the Office of Legal Counsel, he wrote that the president has immense authority under the “unitary executive” theory and should forcefully resist what he considered congressional “incursions … into executive branch prerogatives.”v

Three years later as attorney general, Barr also urged President Bush to pardon the leading figures in the Iran-Contra investigation, an act that ended any legal process that could have determined Bush’s own role in the scandal. As Independent Prosecutor Lawrence Walsh stated at the time:

The Iran-contra cover-up, which has continued for more than six years, has now been completed.vi

Barr oversaw Walsh’s investigation but was “outspokenly hostile” to it and caused the independent prosecutor and his staff to fear they would be shut down before they could issue a final report.vii

It is clear why a president seeking to operate outside the constraints of law and with a guarantee of unaccountability would nominate William Barr to be attorney general. If confirmed, Barr would improperly give the president legal cover to engage in any number of unlawful actions without criminal accountability. This view is unacceptable during any presidency.

In addition to the Constitution, numerous congressional statutes protect civil rights. But Congress cannot carry those laws out. Much of the responsibility for turning its legislative promises into enforceable real-world rights belongs to the Justice Department. When the rule of law erodes, so too do the rights of vulnerable populations.

Perhaps the most damning indictment of William Barr’s current views on civil rights is his effusive praise of Jeff Sessions as “an outstanding attorney general.”viii But history will record Sessions’ tenure as a time of an unprecedented rollback in protections for millions of people.

Barr praised Sessions for stripping transgender people of the statutory protections of federal anti-discrimination laws, notwithstanding a growing number of court rulings that they are so included. The Sessions Justice Department filed an amicus brief in the Masterpiece Cakeshop case, arguing that business owners have a right under the First Amendment to ignore those parts of anti-discrimination laws that protect LGBTQ patrons. Barr praised the so-called “religious liberty” guidanceix Sessions gave to all federal agencies in October 2017. While Barr called it “guidance for protecting religious expression,” it was really a “blueprint for religion-based discrimination”x against LGBTQ people (among others) based on distortions of both the First Amendment and the Religious Freedom Restoration Act. Should the Senate confirm Barr, the Justice Department will likely continue to treat LGBTQ people as second-class citizens, regardless of what the law actually requires.

Barr also praised Sessions for “attack[ing] the rampant illegality that riddled our immigration system.” In fact, it is the administration’s discriminatory and inhumane immigration policies that stray from the law, to the detriment of groups long targeted by the right-wing base. For instance, Barr claimed that Trump’s first Muslim ban was “squarely within both the president’s constitutional authority and his explicit statutory immigration powers,”xi a conclusion strongly rejected by the courts. In fact, the order was so hastily thrown together without regard to law that the administration felt compelled to replace it twice. Nevertheless, Sessions defended it, as he did the inhuman policy of separating immigrant children from their families.xii He even held public events designed to frighten the public by linking Latino immigrants to gang members.xiii Barr’s praise for Sessions implies he finds these actions legal, wise, and humane.

The nominee, if confirmed, would also pose a grave risk to the Constitution’s protection of women’s right to abortion. At his 1991 confirmation hearing, he bluntly told the Judiciary Committee his view that the Fourteenth Amendment’s right to privacy does not extend to abortion and that Roe v. Wade should be overturned.xiv The Senate should not make an avowed opponent of a basic civil right into the nation’s chief officer in charge of protecting civil rights.

The attorney general is also the country’s chief law enforcement officer, yet Barr fails to recognize the severe problems that plague the criminal justice system. When serving in the Bush administration, he supported policies of mass incarceration that have been shown to have had devastating and unfair consequences to communities of color.xv It does not appear that the evidence of the past quarter century has shown him that this has been a failed approach to law enforcement. He signed on to a letter opposing the Sentencing Reform and Corrections Act of 2015, condemning the bill’s reduction of mandatory minimums and its retroactivity provisions.xvi And his praise of Jeff Sessions includes the false claim that “the [Obama] administration’s policies had undermined police morale, with the spreading ‘Ferguson effect’ causing officers to shy away from proactive policing out of fear of prosecution.”

It is clear that Barr’s record shows that he should not be confirmed by the Senate to be our nation’s next attorney general. Senators must use Barr’s confirmation hearing to delve into his record. Unless he vows to recuse himself from the Mueller investigation and reverse the department’s attacks on civil rights that have characterized this administration’s first two years, his nomination should be rejected.

Kavanaugh Has Been Just As Dangerous As We Feared