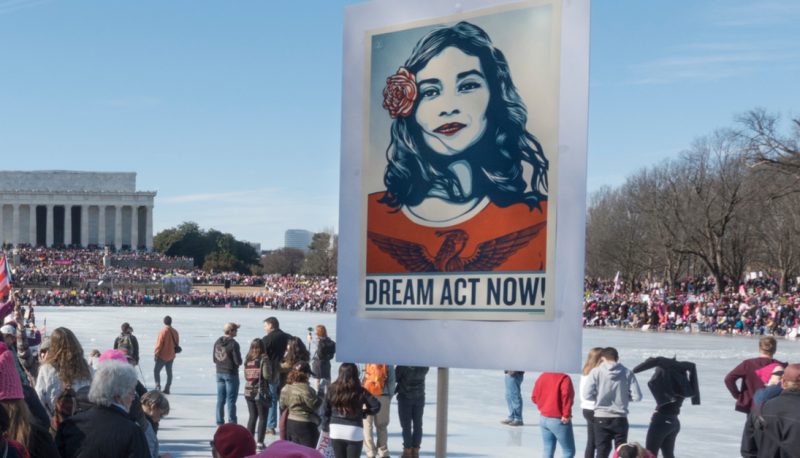 The Progressive Happy Hour: The Fight for Dreamers

More than seven months after the Trump administration announced it will end the Deferred Action for Childhood Arrivals (DACA) program, DACA recipients and other Dreamers remain vulnerable to detention and deportation. As litigation continues, these young people need Congress to step in and provide permanent protections for their futures in the United States. People For the American Way is among nearly 200 national, state, and local organizations urging House Speaker Paul Ryan to call a Dream Act vote now. We are also calling on Congress to reject efforts to criminalize immigrant communities. You can download our April 18 statement, with signers, here.

President Trump’s decision to terminate the DACA program in September of 2017 robbed Dreamers of their protections from detention and deportation and a future in the United States. Now, thousands of young people who’ve grown up in the United States are in limbo. A current court order allows some Dreamers to renew their work permits and continue with their daily lives, but the relief is short-lived and limited, as the Trump administration is asking appeals courts to overturn the order. Congress is the only branch that can fix this by passing permanent legislation that sets the nation’s youngest and newest Americans on the path to full citizenship without harming their parents or other immigrant communities.

We, the undersigned organizations, urge Speaker Ryan to bring up the Dream Act for a vote on the House floor immediately. A majority of the House—and by extension, a majority of the American people—agree we need a vote on the Dream Act now. Congress must also reject Rep. Goodlatte’s bill which would criminalize immigrant communities and fail to offer permanent protections for Dreamers.

We applaud the bipartisan effort led by Rep. Aguilar and Rep. Denham on the “Queen of the Hill” resolution to fix the crisis President Trump created and to respect the will of the American people. Our country cannot wait while our family members, our neighbors, our students, our teachers, and our first responders who are American in all but paper live in fear of deportation. Immigrant youth in our communities should be able to fully contribute to the only country they’ve ever called home. Speaker Ryan, bring up the Dream Act for a vote now and respect the will of the People’s House.