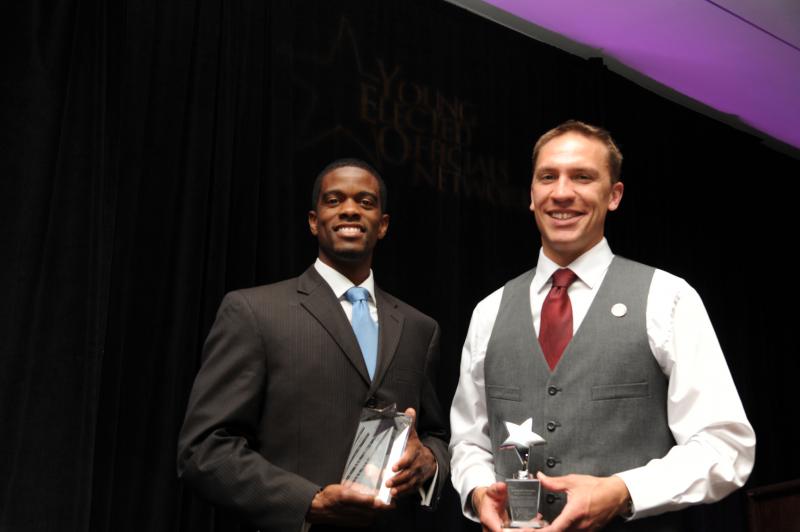 Last weekend, about 200 young, progressive elected officials gathered in Washington at the sixth annual convening of PFAW Foundation’s Young Elected Officials Network. The Network, which includes over 600 state and local elected officials from across the country, honored five of its own who have done exceptional work in their communities over the past year.

City Councilman Melvin Carter of St. Paul, Minnesota was awarded the YEO Network’s Barbara Jordan Leadership Award. The award, named after PFAW Foundation co-founder Barbara Jordan, honors “a young elected official who has shown dedication and support to the YEO Network and has a distinguished record of public service to their community and the progressive movement at large.”

Carter, who is now the YEO Network’s Minnesota state director, became involved in politics after his brother was turned away from a Florida polling place in the 2000 elections. As an elected official, he has continued to work for voting rights and for equal rights and opportunity in his community. In 2009, Carter founded the Frogtown/Summit-University Community Investment Campus, a partnership between city, county, school, and community leaders to support high quality education outcomes for all children. Another priority of his is transit equity: he’s working to create opportunities for local businesses and affordable housing along a planned light rail line in St. Paul.

PFAW Foundation’s president, Michael Keegan, presented the Presidential Award of Distinction to Wisconsin State Senator Chris Larson, one of the state senators who left the state this winter to try to prevent a union-busting law from being passed. Larson has been a strong voice for working people in Wisconsin and around the country.

South Dakota State Senator Angie Buhl was awarded the YEO Network Leadership Award for her deep commitment to the YEO Network and People For the American Way Foundation. Sen. Buhl, who is the youngest member of South Dakota’s legislature, is a graduate of both of PFAW Foundation’s youth leadership programs, Young People For and the Front Line Leaders Academy.

Florida State Representative Dwight Bullard was awarded the YEO Progressive Leadership Award for his commitment to fighting for justice and opportunity in the Florida legislature. Representative Bullard is a fierce advocate for both education and immigration reform.

Massachusetts State Representative Sean Garballey was awarded the YEO Community Service Award for his commitment to servant leadership. In 2009, Rep. Garballey donated his share of a pay increase to state legislators to charity, because he did not believe it was fair for his pay to increase while the staff that works tirelessly to support him was being forced to take furloughs. He has also been active in supporting recovery efforts in Haiti after last year’s devastating earthquake.