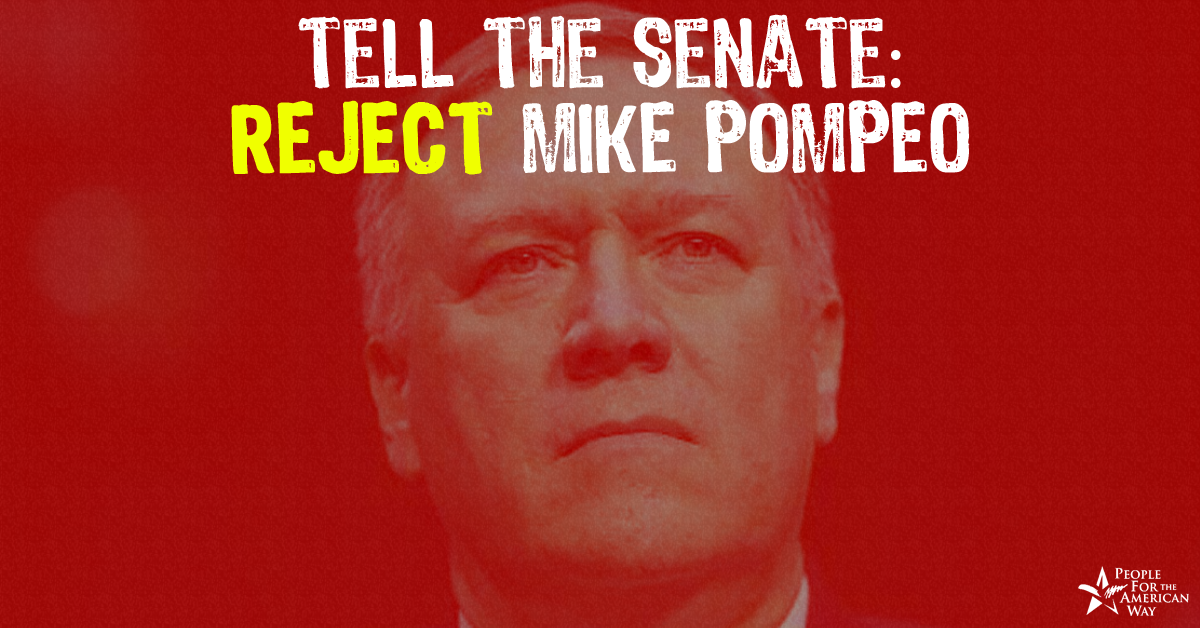 On March 20, President Trump nominated Mike Pompeo, a former Republican member of Congress from Kansas who at the time was serving as director of the Central Intelligence Agency, to follow Rex Tillerson as secretary of state. The Senate Committee on Foreign Relations has scheduled Pompeo’s hearing for April 12. People For the American Way stands united with our organizational allies in the civil rights and reproductive rights communities who oppose the Pompeo nomination. PFAW agrees that effective, enduring, and fruitful diplomacy requires respect for all persons. With his divisive and extreme record of alienating marginalized communities, confirming Pompeo would hinder diplomacy, global development, and security.

On behalf of The Leadership Conference on Civil and Human Rights—a coalition of more than 200 national organizations committed to promote and protect the civil and human rights of all persons in the United States—and the undersigned civil and human rights organizations, we write to express our opposition to the confirmation of CIA Director Michael Pompeo as Secretary of State. Mr. Pompeo has a troubling history of statements and policy positions that have alienated marginalized communities, which raises serious doubts about his ability to represent all in America and promote human rights for all individuals abroad.

During his first congressional campaign in 2010, Mr. Pompeo ran on a disturbing, exclusionary message. His opponent was a natural-born American citizen of Indian descent. Yet when billboards appeared in the district urging the public to “Vote American, Vote Pompeo” and “True Americans Vote For Pompeo,” he refused to condemn the messages.1 This occurred on the heels of an incident in which his campaign had shared a link to an article calling his opponent a “turban topper” who “could be a muslim, a hindu, a buddhist etc who knows.”2 [sic] Mr. Pompeo claimed the action was a mistake and apologized,3 but his record as a congressman showed that he continued to harbor animus towards American Muslims.

Following the 2013 Boston Marathon bombing, for example, then-Congressman Pompeo claimed that American Muslim groups were “potentially complicit”4 for not adequately condemning the attack, even though the American Muslim community was unequivocal in doing so.5 The following year, in a speech to a Wichita, Kansas church, he discussed terrorism in overly-simplistic religious terms,6 ignoring the fact that attackers and their victims can adhere to any faith or none at all. He also maintained close relationships with anti-Muslim organizations and individuals such as ACT For America and Frank Gaffney, who even accused Grover Norquist of ties to Islamic infiltrators.7 In addition, as a House member, Mr. Pompeo voiced support for expanding mass surveillance programs,8 and he cosponsored legislation to ban all refugee admissions, regardless of country, even though refugees were already subjected to a years-long vetting process.9 In 2014, he characterized the Senate’s report on CIA torture as a “liberal game being played by the ACLU and Senator Feinstein,” and called those who engaged in torture “patriots.”10

Mr. Pompeo also has a history of marginalizing other vulnerable populations. For example, long after the repeal of the failed “Don’t Ask, Don’t Tell” policy barring LGBTQ people from military service, he continued to argue for their exclusion, and he characterized the 2015 Supreme Court ruling establishing marriage equality as a “shocking abuse of power.”11 And he has repeatedly voted to restrict women’s access to vital reproductive health care both in the United States and abroad. As a member of Congress, he voted to eliminate federal funding for Planned Parenthood,12 even though the organization can by law only use federal funds for services such as cancer screenings and birth control13 and is the largest provider of contraception for low-income women. He also supported imposing the Mexico City policy/global gag rule,14 which forces health providers to choose between their ethical obligations to inform their clients about all legal reproductive health care options or forego critically needed resources to serve women in poor countries. More recently, Mr. Pompeo’s reported hostility toward CIA diversity and inclusion initiatives15 raises serious concerns about his commitment and ability to lead the Department of State’s diverse, multinational workforce.

The Secretary of State is one of our most important positions for promoting and protecting human rights.  This cabinet level position has a unique and important role requiring the ability to build international coalitions and serve as our representative in international negotiations. Mr. Pompeo’s documented anti-Muslim bias is dangerous to American foreign policy, will cripple his ability to develop essential relationships with Muslim-majority countries, and will irreparably undermine his ability to lead the State Department workforce. In light of Mr. Pompeo’s divisive and extreme record, we urge you to oppose his confirmation. Thank you for your consideration of our views.

You can download this letter, with signers and footnotes, here.

We, the undersigned organizations committed to diplomacy, reproductive rights, and human rights, oppose the confirmation of Mike Pompeo to the position of Secretary of State of the U.S. Department of State. His extensive record as a member of Congress makes clear his opposition to reproductive rights and human rights. Mr. Pompeo’s confirmation to the position of Secretary of State would endanger both the reputation and credibility of the United States of America, and do nothing to end the rapid devolution of women’s rights and human rights within the State Department.

Mr. Pompeo’s legislative record illustrates his hostility towards women, girls, LGBTI people, young people, and their sexual and reproductive health and rights. During his six years as a Representative of Kansas’ 4th District, Mr. Pompeo established a record in opposition to women’s rights and health—casting dozens of anti-women’s health votes. He cosponsored so-called “personhood” legislation that would make abortion illegal nationwide in almost all cases and ban some of the most common forms of contraception, stem-cell research, and in vitro fertilization. He has also repeatedly voted for a ban on abortion after 20 weeks and has voted to defund Planned Parenthood health centers.

Mr. Pompeo has consistently voted for legislation that includes the harmful Global Gag Rule, which bans overseas health clinics from receiving U.S. aid if they use their own, non-U.S. funds to provide legal abortion services, give referrals, or even advocate for abortion-related laws. This is particularly relevant to his nomination to be Secretary of State, given that the Secretary is tasked with leading the implementation and enforcement of President Trump’s massively expanded Global Gag Rule. He also cosponsored legislation to eliminate funding for the United Nations Population Fund (UNFPA), the principal multilateral organization that works to advance family planning and reproductive health around the world.

Beyond his extreme votes and positions on reproductive rights specifically, Mr. Pompeo has a poor human rights record. Through his actions and rhetoric, Mr. Pompeo has consistently undermined a wide range of human rights, including defending the use of torture, promulgating anti-Muslim rhetoric, discriminating against LGBTI communities, and opposing access to abortion, even in the case of rape. He has expressed opposition to principles of non-discrimination and LGBTI rights, including opposing the repeal of Don’t Ask, Don’t Tell and calling the 2015 Obergefell ruling on marriage equality a “shocking abuse of power.” Mr. Pompeo’s animosity towards LGBTI people is deeply inconsistent with continued State Department policy, which, even under the Trump administration, has worked to combat violence and discrimination against LGBTI people abroad as part of U.S. foreign policy. With such an extensive and controversial history, it is unlikely he will be able to operate with credibility and engender the good faith necessary to work as the United States’ primary, and foremost, diplomat.

To preserve America’s global standing and advance its national interests, the U.S. Secretary of State should champion human rights and continue to promote global development and diplomacy. Effective, enduring, and fruitful diplomatic relationships are established and sustained through tireless engagement that must include respect for all persons. Nominating an individual with such an extensive record counter to those values would only hinder diplomacy, development, and security efforts. We request you vote NO on Mr. Pompeo’s confirmation.