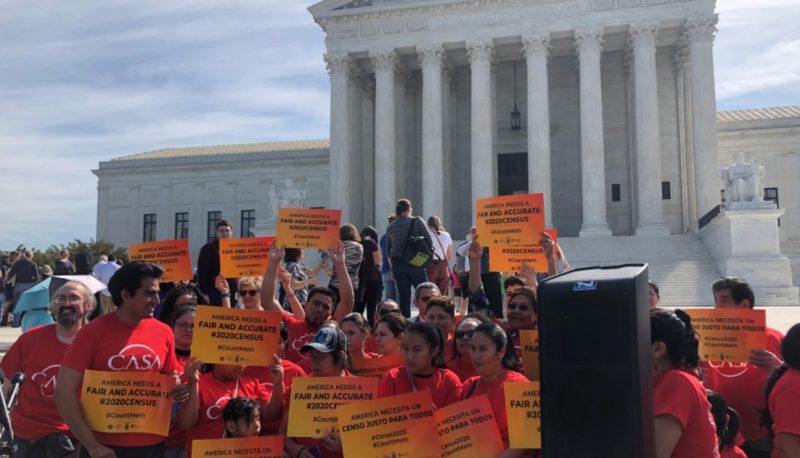 On April 23 the Supreme Court heard oral arguments in the case challenging the Trump administration’s plan to add a citizenship question to the 2020 Census. The census is an extremely important, constitutionally protected tool used to assess communities’ needs for everything from infrastructure and schools to ensuring fair congressional representative. Adding a completely unnecessary and untested citizenship question will likely dissuade people from reporting themselves accurately and cause massive undercounts in communities of color, low-income households and immigrant communities, who have good reason to fear having the information used to deport or otherwise harm them.

“We want to share with you why we believe this administration doesn’t want to count us… Because they are racist.” #2020Census #CountMeIn pic.twitter.com/0ggXbF2DM2

To protest this anti-immigrant attack, PFAW joined a diverse coalition of organizations and activists in front of the Supreme Court on April 23. Some of the participating groups included Fair Immigration Reform Movement, CASA, the Advancement Project, SEIU, and Common Cause.

.@Re4mImmigration: “The census matters because it’s used to make decisions about schools, infrastructure, and representation in Congress.” #2020Census #CountMeIn pic.twitter.com/BgEM7ZqQ1c

One of the first speakers was Natalia Aristizabal from Make the Road New York, who spoke about why the census is important and the issues that could arise in immigrant communities if families don’t feel comfortable filling out the form—it could result in entire communities being grossly underfunded and underrepresented. Another speaker, Yaztziri Tovar, gave a speech about how many members of her family are either undocumented or do not have permanent legal status. She explained that a citizenship question will put families like hers at risk, and she hopes that the Supreme Court justices will make the right decision.

“If the citizen question is included, at least 6.1 people will not respond to the census.” #2020Census #CountMeIn pic.twitter.com/vzOxireq2s

Another speaker, Allyn Brooks-LaSure of the Leadership Conference on Civil and Human Rights, stated that his organization “will not let Trump and his nationalist advisors rewrite the Constitution” by leaving out a significant portion of the population. He reiterated that there is no rational reason for adding a question like this to the census. Wennie Chen of the New York Immigration Coalition discussed how the question is an attack on immigrant-rich communities like New York and will harm everyone in these communities, citizens or not.

.@civilrightsorg: “We will not let Trump and his nationalist advisors rewrite the Constitution.” #2020Census #CountMeIn pic.twitter.com/n7DZJA87tR

Nana Gyamfi of the Black Alliance for Just Immigration discussed the connection between various layers of oppression. She encouraged the crowd to look at the historical context surrounding racial oppression and how tactics like this have been used over and over again to stop people of color from being adequately represented in Congress. She spoke about how Black people over time have had to fight for the right to vote, and stated that they will not now allow Black immigrants to be erased.

Finally, Jonathan Topaz of the ACLU, who helped argue the case, thanked everyone for their grassroots organizing and asked for the fight to continue as we await a Supreme Court ruling. He reiterated that if this case is decided incorrectly, it will deprive millions of people of necessary funding for their communities and adequate congressional representation. The plaintiff in the case gave a speech about how this was a very personal issue to her and her family, and discussed how immigrants are often expected to pay into a community but are deprived of basic benefits to help them survive.

“If they’re willing to take our taxes, why can’t they count us accurately?” -Maya, plaintiff in the SC case today #2020Census #CountMeIn pic.twitter.com/2XMWyLfCEo