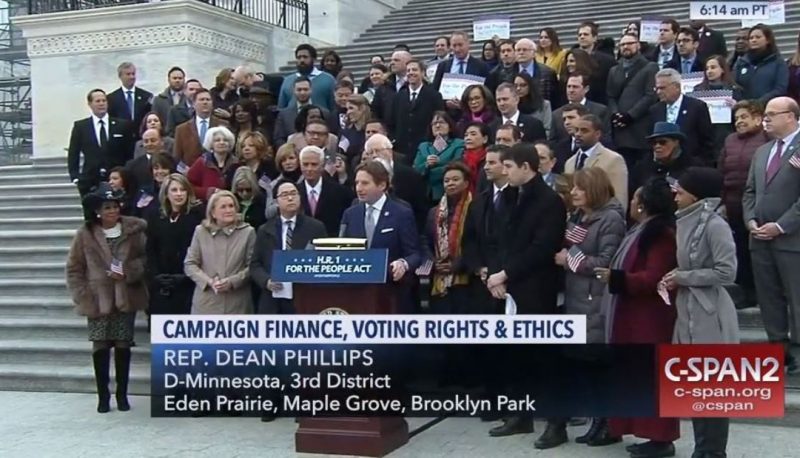 In the 2018 midterms, voters demanded real and substantive reform in Washington. House Democrats in the 116th Congress swiftly responded by unveiling H.R. 1, the For the People Act, a sweeping bill that addresses government corruption, attacks on voting rights, and the ongoing influence of big money in politics.

.@AndyKimNJ: “We should be simultaneously humbled and inspired by the people and the chance to deliver on this promise.” #RestoreTheVote #HR1 #ForThePeople pic.twitter.com/ZZxVTzHMSr

People For the American Way (PFAW) has supported and campaigned for the passage of the For the People Act since its early stages, and has used every bit of our influence to make sure this historic piece of legislation was made a priority. We helped organize rallies, gathered and delivered petitions with hundreds of thousands of signatures, participated in press conferences, wrote numerous pieces on the benefits of the bill, and urged members of Congress to lend their support. That work paid off on March 8 when the House of Representatives voted in favor of the bill.

.@RepKatiePorter: “In a moment we get to go in and vote. This is the moment we came here for.” #RestoreTheVote #HR1 #ForThePeople pic.twitter.com/oIxKyjOwU6

On the morning of the vote, PFAW joined a diverse coalition of organizations and activists in a rally outside the Capitol to encourage the House to vote in favor of the bill, including the Leadership Conference on Civil and Human Rights, Public Citizen, and Common Cause, who have all worked with us extensively to ensure its passage.

.@SpeakerPelosi: “Today we are honoring the people’s trust with this transformative act.” #RestoreTheVote #HR1 #ForThePeople pic.twitter.com/yXmYs4GYjq

First, a press conference was held, where House Speaker Nancy Pelosi, D-Calif., Rep. John Sarbanes, D-Md., and other prominent speakers talked about the importance of the bill and how it has the potential to change the nature of elections and our government at-large and make the system more equitable, participatory and transparent.

After the press conference, PFAW staff joined a group of activists in the gallery of the House of Representatives to watch the floor vote. Members of the House debated the merits of the bill, with many Republicans painting it as an unfair “power grab.” Democrats responded that the For the People Act was a “power grab for the people.” Rep. John Lewis, D-Ga., gave a particularly heartfelt speech about the importance of democracy and why voting is the most sacred right in our country. He encouraged everyone to vote in favor of the bill so that this critical and fundamental right can be protected. In the end, the bill passed the House on a 234-193 vote.

BREAKING! Democrats in the House passed the #ForthePeople Act to save our democracy by making voting more accessible, rooting out big money, and strengthening ethics rules. https://t.co/9UdNohOvOM #HR1 pic.twitter.com/rLCjUx28aV

After its passage, PFAW staff and a coalition of activists delivered over 700,000 petition signatures from concerned Americans to their representatives. They either thanked their congressperson for voting in favor of expanded democracy or put them on notice for failing to help advance the boldest democracy reform package seen in decades.

We’re dropping off petitions from constituents to either thank congressmen for their #HR1 vote today or tell them why they missed a chance to help restore democracy. #ForThePeople @CommonCause @JackieSpeier @RepKenBuck pic.twitter.com/Xxk5076CoC