PFAW Joins Open Letter: We Must Raise Our Voices Against Any Politician Who Campaigns on Antisemitism - People For the American Way
Skip to main content

PFAW Joins Open Letter: We Must Raise Our Voices Against Any Politician Who Campaigns on Antisemitism 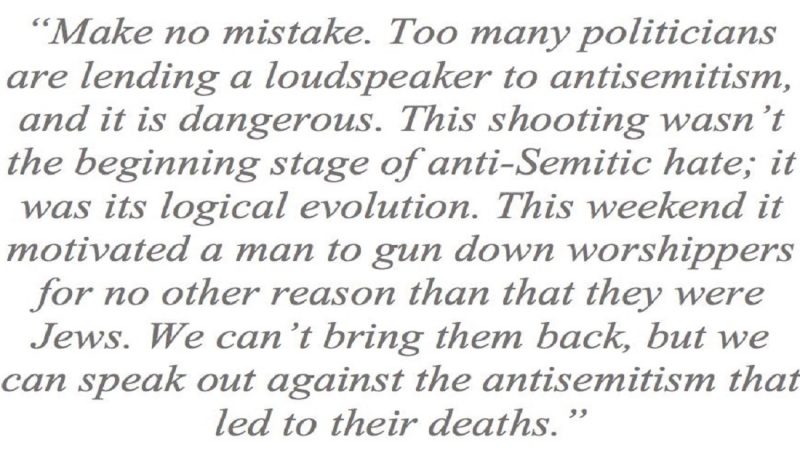 People For the American Way was shocked and horrified by the October 27 attack on the Tree of Life synagogue in Pittsburgh, Pennsylvania. As we continue to mourn, we’re also calling out President Trump and the far Right for celebrating political violence and continuing to engage in antisemitism. PFAW and allied organizations agree that antisemitism endangers our values, and campaigning on such hate must become a strategy that candidates long regret. You can view the letter signed by PFAW President & CEO Michael Keegan here. It will appear in the Pittsburgh Post-Gazette on November 1.

An Open Letter to America about Antisemitism

The massacre at the Tree of Life Congregation in Pittsburgh on October 27 stands as an assault on the lives and inherent human dignity of every American. It is a direct assault on American values to target people because of who they are and what they believe.

This mass shooting is a tragedy, but it was not indiscriminate. It is the direct result of rhetoric that demonizes Jews and celebrates political violence.

The shooter’s profile on the Gab social network is rife with anti-Semitic images and messages posted as recently as the morning of the shooting. Two days before the shooting he posted, “There is no #MAGA as long as there is a kike infestation.” The shooter reportedly entered the synagogue and shouted, “All Jews must die.

Antisemitism today is not always as overt as the Tree of Life Congregation shooter’s social media posts, but it is rampant, and it has been embraced by President Donald Trump and others with influential positions in our country.

The shooting came after a week of attempted bombings of the homes and offices of American leaders and news organizations across the country. The first person targeted in this spree was philanthropist George Soros, a Holocaust survivor who has become the focus of countless conspiracy theories that frame him as a shadowy enemy plotting to subvert what white nationalists view as “Western civilization.”

Just one day before the shooting, President Trump attacked “globalists” in a speech ostensibly meant to call for unity following the bomb attempts. Audience members yelled out “George Soros!” followed by chants of “lock him up!” President Trump reinforced the message, echoing the phrase ‘lock him up’ from the podium.

Earlier in the week, the National Republican Congressional Committee released an ad claiming a Minnesota House candidate was “owned” by shadowy forces including George Soros. The ad was launched on Wednesday, just two days after a bomb was delivered to Soros’ home.

Earlier this month amidst the Senate confirmation of Brett Kavanaugh for Supreme Court Associate Justice, Rudy Giuliani retweeted the message, “Follow the money. I think Soros is the anti-Christ! He must go! Freeze his assets & I bet the protests stop.”

These phrases and catch words used to vilify George Soros are in many cases pulled from the age old tropes used to demonize Jews for centuries and are anti-Semitic through and through. They can’t be overlooked nor hidden by claims of legitimate political disagreements.

We know that it is not only the Jewish community that is at risk from unchecked antisemitism, but also other communities that white nationalists target. The Pittsburgh shooter’s social media posts indicate he was motivated by hateful anti-refugee rhetoric often promoted by fear-mongering elected officials. And, Wednesday’s murder of two African Americans in Kentucky is another example of white nationalists’ continued assault on diverse communities. The shooter attempted to enter a predominantly African American church before committing the fatal shootings, and this act of violence is being investigated as a hate crime. We mourn for these victims as well.

Make no mistake. Too many politicians are lending a loudspeaker to antisemitism, and it is dangerous. This shooting wasn’t the beginning stage of anti-Semitic hate; it was its logical evolution. This weekend it motivated a man to gun down worshippers for no other reason than that they were Jews. We can’t bring them back, but we can speak out against the antisemitism that led to their deaths.

We can pledge to raise our voices against any politician who campaigns on antisemitism. We can commit to vote against antisemitism on November 6.

Any candidate’s notion of a path to victory on November 6 that rests on white nationalist anti-Semitic hate must become a strategy they will come to long regret. It’s on us to ensure that they do.