Senate Republicans took their partisan obstructionism to an unprecedented, wildly irresponsible level this month – they are flat out refusing to even consider any Supreme Court nominee put forth by President Obama. It’s a blatantly political move that the GOP is trying to justify with nonsense explanations, like “we’ve never confirmed a Supreme Court justice in an election year before” (false), and “the American people should have a say in the selection of the next justice” (they did, when they re-elected President Obama in 2012). As much as they might want to pretend otherwise, Republicans are refusing to do their jobs – and threatening to keep a seat on our nation’s highest court empty until 2017!

But we're not about to let them get away with it. That's why we've launched an emergency campaign to counter the GOP's blockade and fill the Supreme Court's vacancy. PFAW is uniquely qualified to lead this fight. Since the 1980s we've been the national leader in fighting the Right's efforts to pack the courts with extreme right-wing ideologues. And that's exactly what they're trying to do now, by keeping a vacancy on the Court for an entire year and playing politics with our federal judiciary. Republicans are shirking their constitutional responsibility to give fair consideration to a Supreme Court nominee and they must be held accountable. We have a long, tough road ahead of us, but we're not backing down, and we're so grateful to have PFAW members like you on board with us for this historic fight. 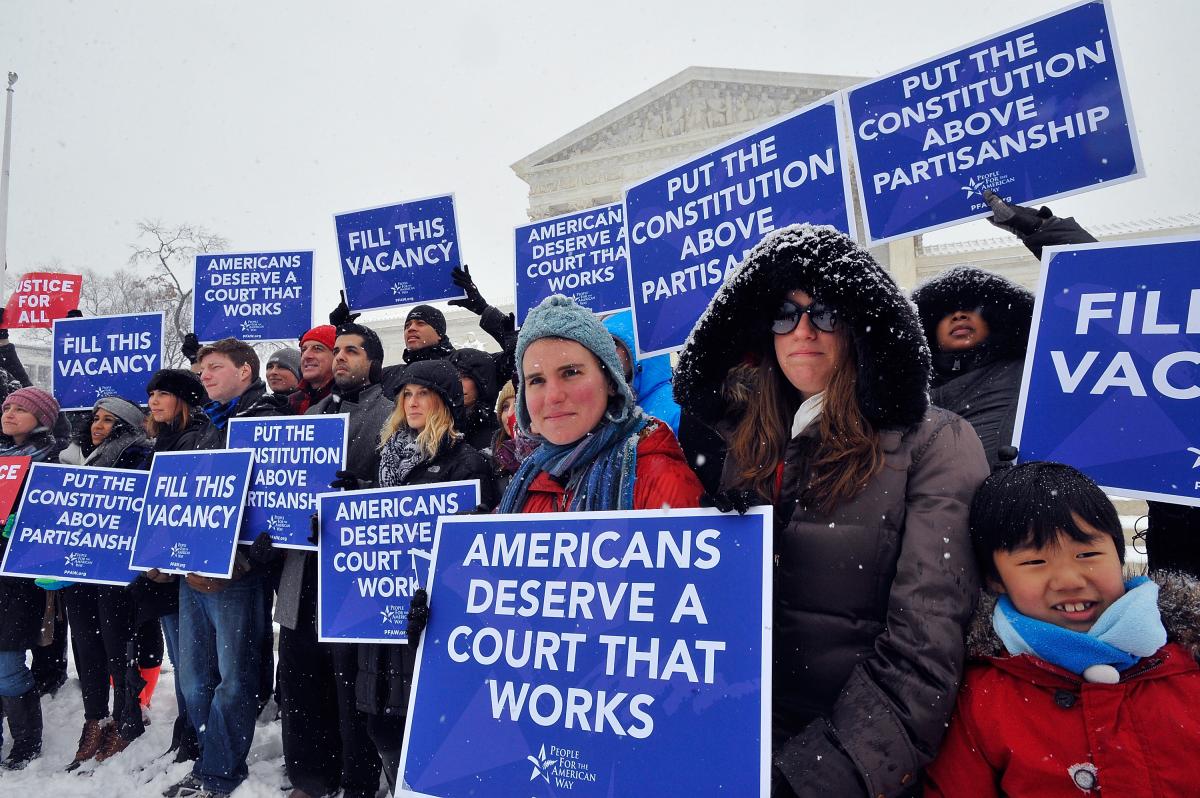 Just hours after the death of Justice Antonin Scalia, Republicans made their intentions known: no fair consideration of any nominee put forward by President Obama. So we leapt into action that weekend, mobilizing supporters and activists for an impromptu rally outside of the Supreme Court that has already become the image of the movement, appearing in the New York Times, the Washington Post, the Economist, the Atlantic, and more. We also held a campaign kickoff telebriefing this month for PFAW members across the country, to discuss our strategy for pushing the GOP to back off their unprecedented obstructionism

We're also fighting back by turning up the pressure on Senate Republicans. We teamed up with partner organizations to deliver over 500,000 petition signatures calling for fair consideration of a nominee to Senator Majority Leader Mitch McConnell's Kentucky office. And this week we delivered one million signatures to the U.S. Senate! Americans want to see this Supreme Court vacancy filled, and we're making sure Republicans know that by refusing to consider a nominee, they're going against their constituents.

GOP senators’ refusal to even consider any Supreme Court nominee isn’t just a violation of their constitutional responsibility – it’s also not what their constituents want! Recent polls have shown that a majority of Americans support filling the Supreme Court vacancy, and for some Republican senators, the blockade is already hurting them with voters. We’re working to identify those Senators, and hit them where it hurts: with their constituents. In a robocall we released in Wisconsin this month, activists heard from Martin Sheen about Sen. Ron Johnson’s obstruction of President Obama’s nominee. Sheen asked Wisconsinites to call Sen. Johnson and tell him to put his constitutional duties first, and give fair consideration to whoever President Obama nominates. The robocalls received immediate media attention – exactly what Sen. Johnson doesn’t want. We’re strategizing similar actions for other states where Republican senators are facing tough re-election battles.