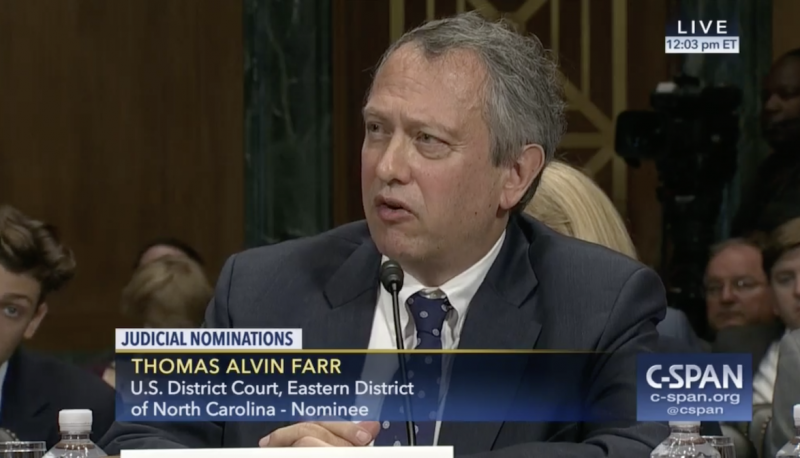 PFAW Statement on Cloture Petitions on Farr and Kobes

In anticipation of a Senate floor vote the week of November 26, People For the American Way is renewing its opposition to the nomination of Thomas Farr to a seat on the U.S. District Court for the Eastern District of North Carolina. You can download our floor letter here. Click here to view our earlier committee letter.

On behalf of the hundreds of thousands of members of People For the American Way, I write to express our opposition to the nomination of Thomas Farr to a seat on the U.S. District Court for the Eastern District of North Carolina.

Farr is a well-known attorney in North Carolina who officials have long turned to for defending partisan and discriminatory efforts to undermine the right to vote. That has included North Carolina’s notorious voter suppression legislation, which contained a discriminatory voter ID requirement and provisions reducing or eliminating out-of-precinct voting, preregistration of 16-17 year-olds, early voting, and same-day registration. In striking down the law, the Fourth Circuit found that the legislation was actually intended to make voting harder for African Americans, and that its provisions “target African Americans with almost surgical precision.”i This was an ugly law with obvious motivations that are inconsistent with a belief in the fundamental right to vote, yet Farr willingly accepted the case so he could defend it in court.

He also represented North Carolina in defending two congressional districts that were held to be unconstitutional racial gerrymanders by the Supreme Court in 2017. The scheme Farr defended reduced the influence of African American voters in violation of the Equal Protection Clause.ii

Farr also served as counsel to then-Sen. Jesse Helms’ reelection campaign, which in 1990 engaged in a notorious scheme designed to frighten African Americans out of exercising their right to vote. The campaign sent 100,000 postcards to African American voters falsely suggesting they might not be eligible to vote in their precinct and that they could be imprisoned for up to five years if they tried to vote there.

During his confirmation hearing, concerned senators asked Farr if he had been involved in the scheme, and he assured them that he had not known of the postcards when they were sent. But after the committee voted to advance him on a party-line vote, evidence surfaced that he had been at a “ballot security” planning meeting where the postcards were specifically discussed.iii

Farr’s career has also been dedicated to weakening unions and undermining anti-discrimination laws. Early in his legal career, he was an attorney for the National Right to Work Legal Defense Foundation, a right-wing organization that strongly opposes workers’ efforts to negotiate fair terms of employment and exercise their legal rights through unions. But the bulk of his career has been in private practice, defending corporations sued for violating their employees’ legal rights, including those related to prohibited discrimination and workplace safety.

His opposition to holding corporations accountable for discrimination is not just a position he takes on behalf of his clients. In 2016, when the state legislature passed an anti-transgender bill, it included a one-sentence provision stripping North Carolinians of the right to go to court when they are victims of unlawful discrimination. State law still says that employers cannot discriminate on the basis of race, sex, religion, national origin, age, or disability, but the means of enforcing that prohibition were severely weakened. Speaking on his own behalf, Farr expressed his support, saying “it’s better policy for the state.”iv

This nomination cannot be divorced from the history of this vacancy—a vacancy that should not even exist. But the fact that it does, and the reasons for its continued existence, when combined with Farr’s record, warrant defeat of his nomination. Confirming Farr would reward efforts to transform our federal courts into partisan weapons.

In 2013, President Obama nominated federal prosecutor Jennifer May-Parker, who was then serving as the chief of the Appellate Division at the district’s U.S. Attorney’s Office. She would have been the first African American federal judge in the Eastern District. However, despite having recommended her for a judgeship during Obama’s first term, Sen. Burr never returned his blue slip.v Therefore, following long Senate tradition, the committee did not consider her nomination, and it was returned to the president at the end of 2014.

Then, after more than a year of continued outreach, President Obama nominated Patricia Timmons-Goodson, a former Justice of the North Carolina Supreme Court. Like May-Parker, she would have been the first African American judge in the district’s history. However, the state’s senior senator openly stated that he would never return a blue slip for anyone that President Obama might nominate. The committee did not consider her nomination, and the vacancy remained open when President Trump took office.

Both of President Obama’s nominees were indisputably qualified, had spent their careers in public service, and—as noted above—would have finally ended one of the ugly artifacts of Jim Crow: More than half a century after passage of the Civil Rights Act, not one judge in the district has been an African American.

And now President Trump has nominated Thomas Farr, someone who would bring neither long-overdue diversity nor a career dedicated to public service to the court. It appears this nomination is based on Farr’s supporters’ expectation that he would continue to be a steadfast ally, letting his partisan loyalty and conservative political ideology shape his judicial opinions. Why else block two qualified nominees with uncontroversial records? Why else keep a vacancy open throughout the entirety of a two-term presidency, increasing the workload on the remaining judges in a district where the caseload was already too high for the effective delivery of justice?

We cannot allow our courts to become blatant extensions of our political parties, and we cannot give a lifetime judicial position to someone so closely associated with voter suppression. We urge you to vote against confirming Thomas Farr.