Cristela Alonzo with PFAW staff on the night of her D.C. showing of her comedy tour, "My Affordable Care Act."

On Friday, October 11, PFAW staff joined comedian and PFAW board member Cristela Alonzo at the D.C. showing of her “My Affordable Care Act” comedy tour at Miracle Theater. 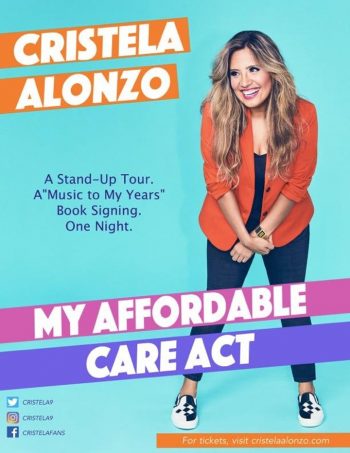 Alonzo’s D.C. show was scheduled days after the release of her new book, “Music to My Years: A Mixtape-Memoir of Growing Up and Standing Up.” In addition to sharing complimentary tickets to her show with PFAW staff, Alonzo signed copies of her book for the PFAW team and the sold-out, 200-something persons who attended.

During her show, Alonzo discussed social issues, radical conservatism, white male privilege and how her “heartbroken” reaction to Trump’s presidency led her to become more politically active under the mentorship of civil rights leader and fellow PFAW board member, Dolores Huerta.

Alonzo, who is Mexican-American, is the first Latina to create and star in her own sitcom, appropriately named “Cristela.” With regards to her political activism and advocacy, Alonzo said, “I am a first-generation American born to an undocumented mother that taught me to love this country. I believe it is my duty to give back and fight so that everyone can get the same thing my family got: a chance.”

The day after her performance, Alonzo joined PFAW in Manassas, Virginia for a day of canvassing for PFAW and Next-Up endorsed candidates. In addition to her activism with PFAW, Alonzo has been an advocate for Define American and La Union del Pueblo Entero among other political organizations.