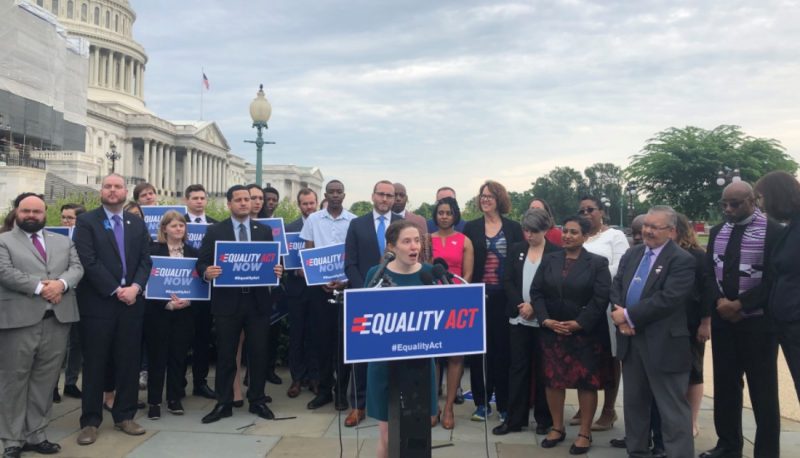 On May 17, the Equality Act (H.R. 5), which seeks to ensure the right to live free from discrimination based on sexual orientation and gender identity, among other provisions, passed the House of Representatives by a bipartisan 236-173 vote. Although the LGBTQ+ movement has come a long way, the fight for LGBTQ+ civil rights did not end with achieving marriage equality in 2015. This community still lacks clear, consistent legal protections in most states, leaving people open to systemic discrimination and hate.

Carter Brown: “I had to endure months of offensive harassment and gossip… I learned the American dream is not accessible to all Americans.” #EqualityAct #EqualityStartsWithMe #LGBTQ pic.twitter.com/uw0qxsTrFK

The day before the House vote PFAW joined a number of organizations including ACLU, PFLAG National, and Freedom for All Americans, in delivering more than 100,000 signatures of individuals who support the Equality Act. The petitions were delivered to Rep. David Cicilline, D-R.I., the bill’s lead sponsor.

Thank you @davidcicilline for accepting these signatures today from those who support the #EqualityAct. pic.twitter.com/hnPMVbyDB3

As the House geared up to vote on the bill on May 17, PFAW was back on the Hill for a press conference to preview its passage and encourage Senate Majority Leader Mitch McConnell, R-Ky., to schedule a vote so that these protections can finally become law nationwide. Those who attended included the Human Rights Campaign, PLFAG National, Family Equality Council, National Center for Transgender Equality, and the ACLU.

An incredible group of speakers are gathering on Capitol Hill this morning for a press conference in support of the #EqualityAct. The House will finally vote on the bill later today. Call your reps now if you support #LGBTQ rights and tell them to vote yes on this legislation! pic.twitter.com/KjBUClMBkr

Rep. Cicilline joined us again and discussed how the vast majority of Americans do support this legislation and want to see it become a law, stating that “the only place it remains controversial is the Republican Party.” Rep. Chris Pappas, D-N.H., took a moment to thank the LGBTQ+ activists of the past, some of whom gave their lives for the movement, and he spoke about his optimism for the future.

.@RepChrisPappas: “Although we have not always recognized, we have made incredible progress… We stand on the shoulders on those visible in the past.” #EqualityAct #EqualityStartsWithMe #LGBTQ pic.twitter.com/RUTXN2EvvU

Mara Keisling from the National Center for Transgender Equality thanked everyone for their hard work, but noted that the work on this legislation would not be over with House passage. She called on Leader McConnell to bring it to the Senate floor for a vote, and noted that she is hopeful that enough Senate Republicans would do the right thing. Kristine Lucius from the Leadership Conference on Civil and Human Rights discussed how many states are still lacking affirmative legal protections, and stated that “no one’s civil rights should depend on their zip code.”

.@MaraKeisling: “We have not come this far to only come this far. Once it passes the House, @senatemajldr must bring this bill to a vote.” #EqualityAct #EqualityStartsWithMe #LGBTQ pic.twitter.com/k2TDmhBQoA

Kierra Johnson from the National LGBTQ Task Force reminded the crowd that it was the anniversary of Brown v. Board of Education and discussed how the Equality Act marked new, was another historic civil rights progress, stating that “’separate but equal’ has no place in separating us by race. It has no place in separating us by identity.” Finally, Jen Herrick from People For the American Way discussed how the Equality Act serves to strengthen existing civil rights protections and stated that stated that “[t]his is a bill that every American should be proud of. Fighting for justice for all is the American Way.”

.@jenherrick1: “This is a bill that every American should be proud of. Fighting for justice for all is the American Way.” #EqualityAct #EqualityStartsWithMe #LGBTQ pic.twitter.com/xHrOjAtsyk