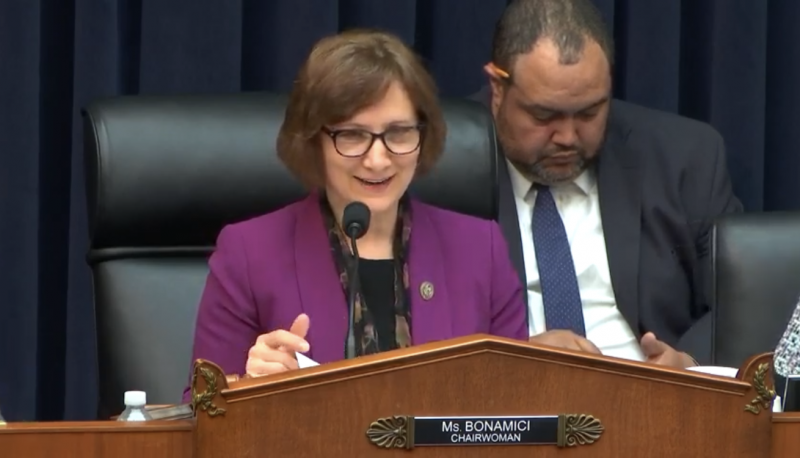 On April 9, People For the American Way attended a congressional hearing regarding the Equality Act (H.R. 5), a bill which seeks to ensure the right to learn and work free from discrimination based on sexual orientation and gender identity. Despite significant steps toward ensuring LGBTQ rights in the past decade, many states still do not have comprehensive anti-discrimination laws in place, subjecting millions of families to uncertainty and hostility in their communities and workplaces.

A federal law like the Equality Act would affirm nationwide non-discrimination protections based on sexual orientation and gender identity, allowing more LGBTQ Americans the basic rights guaranteed by our Constitution. To support its passage, PFAW attended a hearing hosted by the House Education & Labor Committee, where multiple witnesses testified about the need for this legislation and the practical effects of its implementation.

Rep. Suzanne Bonamici, D-Ore., chaired the hearing and gave an impressive opening statement about the legal uncertainties currently plaguing our system and in turn burdening the LGBTQ community. She stated that we cannot impede progress and that this bill was long overdue. Rep. Jahana Hayes, D-Conn., also gave a fiery speech during the hearing about how students and parents should not have to suffer in isolation or be forced to advocate for themselves, indicating that Congress is not doing its job in passing protective legislation. She stated that more often than not, it’s the children who understand the value of equality and fairness, and that adults are typically the ones acting as a drag on progress.

.@JahanaHayesCT: "You should not have to advocate for your child to be treated equally in the classroom. That should be a given."#EqualityAct #LGBTQ pic.twitter.com/gmaqeVJFs7

The first witness to give her testimony and answer questions was Kimberly Shappley, an LGBTQ rights activist from Texas and mother to Kai, her transgender daughter. Shappley told an emotional story about accepting her daughter’s gender identity and realizing the hardships that Kai would have to endure because of society’s ignorance about many transgender issues. After Kai’s school refused to let her use the correct restroom, their entire family was forced to move to a more inclusive district. After moving, her daughter picked up new hobbies, did better in school, and was able to “be a kid again.” She pleaded with Congress for better LGBTQ protections because no child should have to suffer the isolation and trauma that Kai went through in living true to her identity.

.@shappleyk: “The biggest thing about being in an inclusive school district is that Kai is just a kid now… She ran upstairs to write in her diary about using the restroom at school. How sad is that?”#EqualityAct #LGBTQ pic.twitter.com/uofWlEeYDO

Another witness, Patrick Hedren of the National Association of Manufacturers, discussed the economic benefits of uniform federal anti-discrimination protections and how companies that have implemented such standards have improved worker morale overall. He pointed out that many LGBTQ individuals are afraid to leave their jobs for fear of moving into a non-inclusive work environment, which doesn’t just stunt their personal career growth, but also affects the economy’s growth as a whole. He also stated that workplaces that implemented anti-discrimination policies typically had an easier time attracting and maintaining talent, proving that similar policies should be implemented across the board through federal legislation.

Mr. Hedren: “The value of these protections extends beyond the workplace. Being able to feel safe in your community… is important to employees.”#EqualityAct #LGBTQ pic.twitter.com/PKUTsT3Ryz

Finally, Sarah Warbelow from Human Rights Campaign testified about how LGBTQ individuals are currently facing ongoing discrimination in very real ways. She cited a case in which a man was denied the ability to serve on a jury because of his sexual orientation. Counsel in the case argued that this man could not be objective because the issue being litigated involved HIV treatment. Prejudices like this have for too long prevented LGBTQ individuals from fully participating in important parts of our democracy, and inclusive eeeqlegislative protections are long overdue. Warbelow argued that the time to pass the Equality Act is now, and encouraged everyone in Congress to support its passage as it makes its way through the House and Senate.

.@SarahWarbelow: “It would make it possible for individuals and businesses to know their rights by reading a sign in the break room, instead of going to the court room.” #EqualityAct #LGBTQ pic.twitter.com/KQEtf9q4ZA