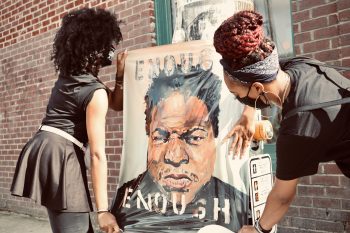 On a sunny day at the end of August 2020, Krystal Garner, photographer Brooke Jarrett, and videographer Catt Hamlin led their team of local activists into the sweltering Atlanta heat. Dressed in matching face masks and t-shirts printed with Jeffrey Gibson’s artwork, the street team set out to spread the message that they have had ENOUGH of Trump! Across the city, the team wheat-pasted prints of PFAW’s partner artists’ work, including art from Gibson, Beverly McIver, Takaaki Matsumoto, and LaToya Ruby Frazier.

PFAW’s ENOUGH of Trump campaign is partnering with local activists across the country to share the campaign’s artwork. Our work in Georgia reflects the state’s emerging role as a potential swing state, including the suburban areas of Atlanta that could play a pivotal role in this year’s elections. 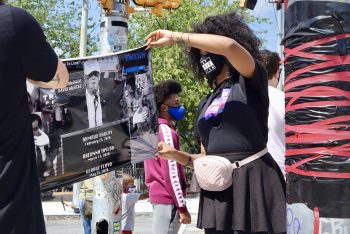 The goal of the ENOUGH of Trump campaign is to get out the vote through the promotion of art-forward messaging, namely through installing these works of art in communities around the country – especially in key battleground states. In addition to the community-based wheat-pasting, ENOUGH’s Kickstarter campaign has raised funds to get billboards prominently displayed in swing states Pennsylvania, Michigan, Wisconsin, and Florida.

The multi-city street teams’ work is just one of the many different facets of the project, aiming to raise awareness of the campaign and to remind the public that we have all had ENOUGH of Trump’s lies, bigotry, corruption, and so much more. 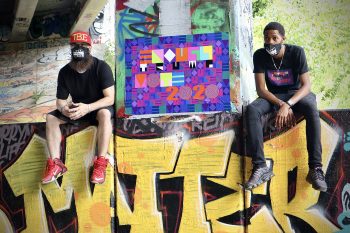 Georgia’s voting systems have had a rocky start in the 2020 election season, with long lines and machine malfunctions making for a chaotic June primary. These problems also disproportionately affected Georgia’s communities of color, deepening the systemic racial divides that are already such an endemic problem in this country. Encouraging people to consider voting early – be it in person at early voting locations or through mail-in ballots – is one important way to avoid a repeat of the June 8 primary on November 3. 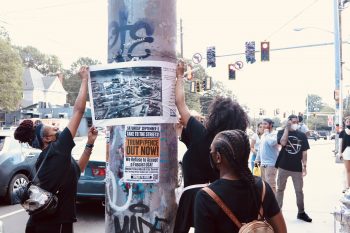 As for Georgia’s growing role as a possible swing state, election experts point to a few key signs that indicate that the state is a worthwhile place for Democrats to invest: Two historically Republican Atlanta suburbs went to Hillary Clinton in 2016, and Stacey Abrams only lost her bid for governor by a narrow margin in 2018. Partnering with local activists in Atlanta – who are experts on their city and where we most need to get out the vote – is a vital part of our strategy to encourage Democratic investment in these vulnerable Republican areas.

We’ve been honored to work with our artists and local activists to get this campaign out across the country.

Keep an eye on the ENOUGH of Trump site and PFAW’s email and social channels for more ways that you can get involved in the movement to defeat Trump this fall!