What is Next Up Victory Fund?

Earlier this month, PFAW’s Next Up Victory Fund had its first big win.

We are officially 1 for 1! And we’ll be announcing more endorsements soon.

THANK YOU to all of the Virginia PFAW members who helped out with Justin’s campaign and to all the PFAW supporters nationwide who have already stepped up to support the Next Up Victory Fund.

PFAW’s Next Up Victory Fund is a major new initiative to scale up our years-long work to support young, progressive candidates running for state and local office across the country.

The critical needs of building both a deep bench of progressive candidates and a pipeline to retaking progressive power in the states have never been more urgent.

Democrats have lost a net 1,037 seats in the past eight years, while Republicans have methodically taken complete control of 32 legislatures and control every branch of government in 25 states — half of the entire country.

This has allowed the Far Right to ram through a disastrous agenda of gerrymandering, voter suppression, and attacks on the rights of women, workers, immigrants, LGBTQ people, and others, virtually unchecked.

The goal of Next Up is to significantly shift the map within the next few election cycles to retake power in the states, win vital Democratic control over the redistricting process, and nurture a bench of progressive officeholders well positioned to win in their districts, statewide, and in future pursuits of federal office.

In the near term, we’ll be focusing heavily on Virginia, where the general election this November will help determine the future of redistricting in a battleground state of increasing national importance.

This year’s elections in Virginia are important for so many reasons. It’s in the South but it’s a bellwether state with a growing Latino population, where Democrats have recently fared well and hold every statewide elected office. Due to right-wing gerrymandering, however, both chambers of the state legislature are controlled by Republicans as are 7 of the state’s 11 US House seats! That’s why it’s critical for Democrats to maintain their hold on statewide seats while we work to flip majority control in the legislature over the next two state election cycles.

Justin Fairfax is just the beginning. But his success, as well as his enthusiastic embrace of Next Up’s endorsement, show the value of our support. Our endorsement was even the top-featured item on his campaign website all the way through Election Day! 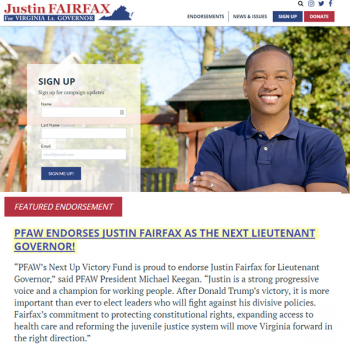 At 38, Justin is a great example of the kind of candidate Next Up seeks to support. He’s demonstrated a commitment to protecting constitutional rights, expanding access to health care, and reforming the juvenile justice system. And his priorities include building economic and educational opportunities, as well as defending equal rights for women, people of color, and the LGBTQ community.

We’re working tirelessly to identify and vet more young progressive candidates like Justin, whom we’ll support in a variety of ways, including, but not limited to:

Stay tuned to PFAW emails and PFAW.org for more about our Next Up programs (and the Virginia elections) in the days and weeks to come.