This April, a group of more than 100 progressive African American clergy gathered in Columbia, South Carolina for the Spring Training Institute of People For the American Way Foundation’s African American Ministers Leadership Council. Among a week of trainings, advocacy meetings at the state capitol, and strategic conversations about the Black Lives Matter movement, this ecumenical body of women and men took time to gather together for a prayer in front of the capitol where the confederate flag still waves. 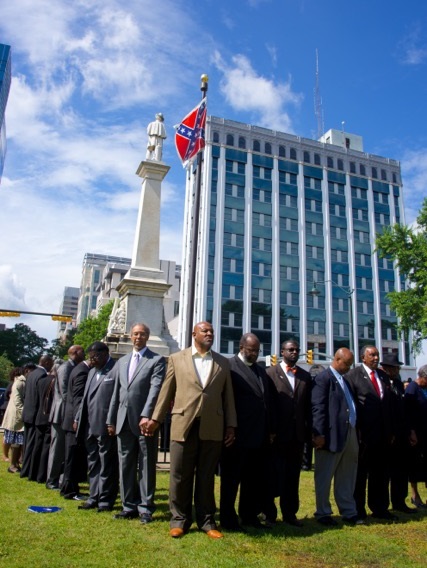 That week, less than two months before our friend and brother Reverend and State Senator Clementa Pinckney, along with members of the congregation, were massacred at Emanuel A.M.E. church by a shooter who embraced the Confederate flag, clergy stood hand in hand in prayer, reflection, and even tears for the removal of this symbol of hate and bigotry.

The public prayer was the culmination of ongoing work led by South Carolina faith leaders like Reverend and State Representative Terry Alexander. Rep. Alexander has long been a guiding voice in this push, meeting with other elected officials and advocating strongly for its removal.

Why did we pray that day that started out with dark clouds and rain and turned into one of sunshine and light? Because the Confederate flag remains a visible, strategically placed reminder of a southern heritage that embraced slavery, segregation and hate. Because a symbol rooted in the dehumanization of Black Americans is still prominently waving at the capitol, still validated by a government body.

We first prayed facing this symbol of disunity – a symbol of the painful past – for a present and future of peace, unity, and prosperity as a people and a country. We then prayed and sang with our backs turned to it, rejecting the division and pain that it continues to represent. In memory of the love and compassion of Senator Pinckney and the eight others, it’s time for the state of South Carolina to do the same.