Pray, Preserve, and Protect Our Health Care - People For the American Way
Skip to main content

PFAW’s African American Ministers In Action (AAMIA) has been a strong supporter of the Affordable Care Act (ACA) signed into law on March 23, 2010 by President Barack Obama. The benefits to uninsured Americans in general, and uninsured African Americans specifically, strengthened our commitment both at the signing and also in the months after—when some states refused to expand Medicaid, additional restrictions were added, and legal challenges took place in the courts. It is because of our commitment to the health and wellbeing of American families and workers that AAMIA joined with other faith-based institutions in a 48-hour call-to-action last week leading up to the vote on the GOP plan to gut the ACA. 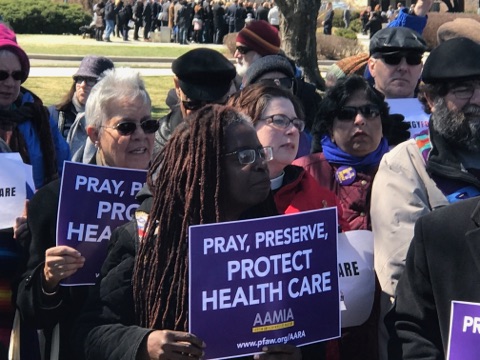 Some AAMIA members used social media and text messages to urge hundreds of thousands to call their U.S. representatives and tell them to “preserve and protect our health care!” Others, like Jason Ridley, pastor of Hilltop Community Worship Center in Columbus, drove from Ohio to meet face-to-face with their representatives on Capitol Hill. 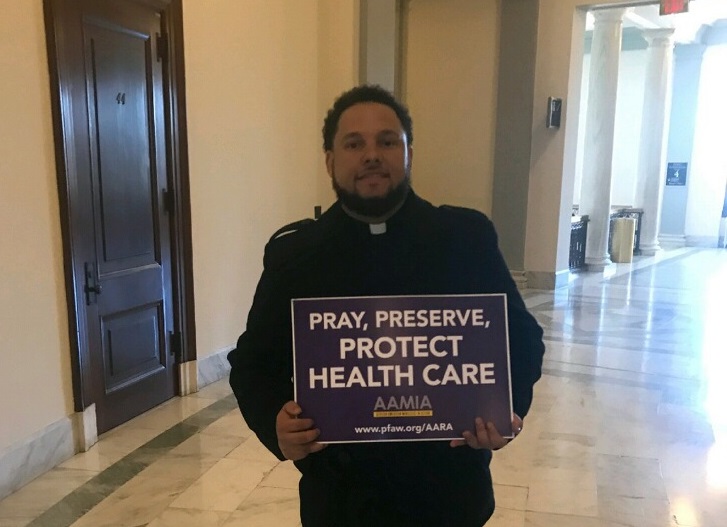 “As an African American in this country, I recognize that when decisions are made or laws are implemented, they often impact our communities the fastest and unfortunately the hardest. Healthcare is no different, because public health is a public policy issue. Many of our parishioners, families, and communities would be greatly impacted by the repeal of the Affordable Care Act. For this reason, I thought it was important to fight for healthcare and stand for justice as a representative of AAMIA. I, along with other colleagues, stood in solidarity with the faith groups and organizations present because we recognize the importance of this issue and the critical impact a ‘yes’ vote on AHCA would have on the communities we serve.”

The ACA was a huge step forward, and to attempt to repeal and replace it would have been a major, costly step backward. To increase the number of uninsured people by 24 million is both politically and morally wrong. People of faith called, used social media, and made personal visits so that their representative in Washington would know that they were watching—and expecting them to protect “the least of these” when casting their votes.

Although we celebrated the AHCA vote being pulled this Friday, we know that this is not the end. We remain committed to doing all we can for vulnerable populations, to prioritizing the poor and the sick over the healthier and wealthier, and to addressing the threat to birth control availability, pregnancy check-ups, cancer screenings and more for millions of women if reimbursement to existing health care clinics is denied.

Pastor Ridley and I are Millennials, and we believe health care is a basic human right. We will continue to make our voices heard—alongside others—to our members of Congress, urging them to consider the health and wellbeing all men, women, children and families in their congressional districts. We call on them to invest in a better, healthier quality of life for all Americans today and in the future by standing in opposition to any future attacks on health care.

Jasmine Bowden is the administrative coordinator of African American Religious Affairs at People For the American Way.