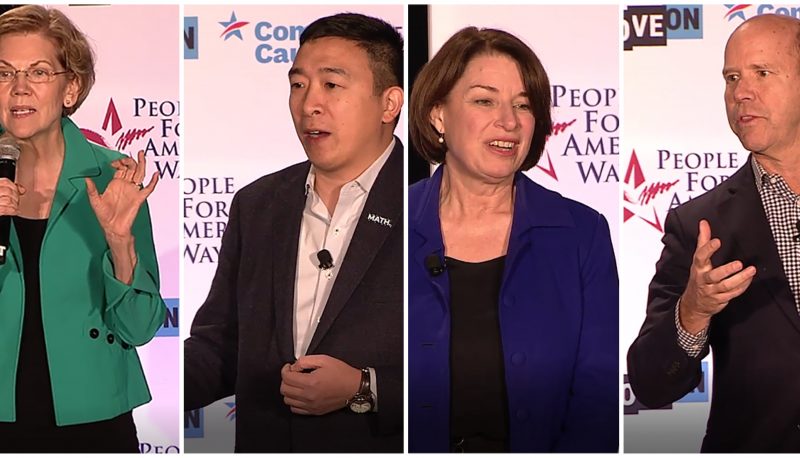 Presidential candidates address the audience at the "We the People" forum in Des Moines, Iowa.

After three years of Trump’s ongoing assault on our federal judiciary, the courts have become an especially salient issue in the 2020 presidential election. Yet in previous presidential debates and other events, candidates have seldom been asked to outline their plans to restore fair-mindedness and balance to the courts.

To hear more from candidates about this critical issue, PFAW and seven other progressive advocacy groups co-sponsored the “We the People 2020” forum on January 19 in Des Moines, Iowa. Held just two days before the 10-year mark of the devastating Supreme Court ruling in Citizens United, the forum gave candidates a platform to focus on the need for democracy reform to address the dominance of big money in politics, as well as the assault on voting rights and the connection of these democracy issues to fair courts.

Over a three-hour period, the candidates spoke in detail about the dangerous views of Trump’s judicial nominees and the Republican Senate’s complicity in confirming them, as well as the qualities they would look for in judicial nominees if they were to become president, the need to prioritize judicial nominations from the outset of their term, and their plans to ensure their nominees’ confirmation in the Senate.

Check out a few highlights below:

During her closing remarks, PFAW Executive Vice President for Policy and Program Marge Baker reminded the audience, “We want our next president not just to talk about equal justice for all, but to commit to populating the courts with judges and justices who deliver it.”

You can watch the forum in full here.