Protest to #StopKavanaugh Outside U.S. Capitol Following Day One of Senate Confirmation Hearing - People For the American Way
Skip to main content

Protest to #StopKavanaugh Outside U.S. Capitol Following Day One of Senate Confirmation Hearing 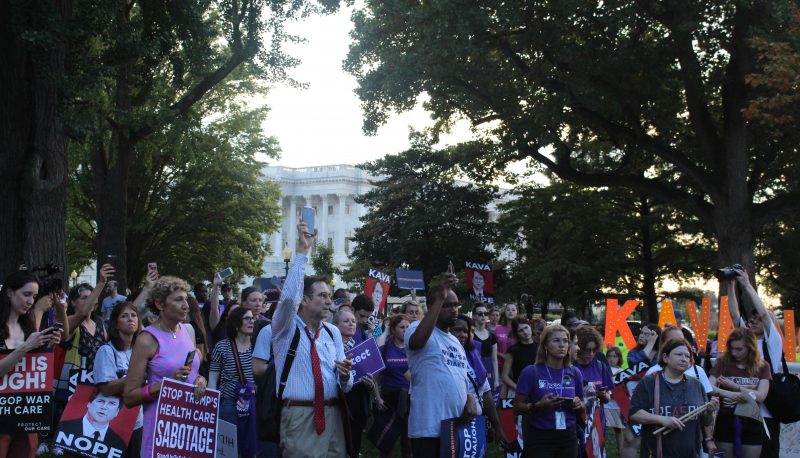 Yesterday, September 4, was a tumultuous time on Capitol Hill as it was the first day of the hearing on Brett Kavanaugh’s nomination for the Supreme Court. This sparked anger, alarm and anxiety for millions of Americans who fear  grave consequences if Trump’s latest SCOTUS nominee is confirmed by the Senate and obtains a lifetime appointment. While protests were taking place across the country, People For the American Way joined concerned D.C. area residents, members of Congress, and allies from groups including NARAL Pro-Choice America, National Women’s Law Center, and Demand Justice in rallying against Kavanaugh’s nomination in front of the United States Capitol.

We still do not have access to anything approaching Kavanaugh’s complete record, but what we do know paints a very bleak picture. His past judicial decisions indicate that he wants to roll back civil rights, limit access to reproductive health care, destroy environmental protections, and reverse LGBTQ equality. In addition, his statements both on and off the bench demonstrate that he would not be an effective check on presidential power, threatening the integrity and independence of the Mueller investigation.

Speakers at the event represented a wide range of people each with a distinct set of concerns and put the personal stories of people who could be severely impacted by Kavanaugh’s confirmation on bright display. One of the most striking set of speakers included three individuals who had all been diagnosed with a terminal illness and were only able to get health care coverage via the Affordable Care Act. They explained that if Kavanaugh is put on the Court and the ACA is gutted or reversed, thousands of Americans could face the death sentences they had before they received coverage. Another striking speaker, Dani Miller, was a student representative from March For Our Lives and spoke of the anxieties she has over the epidemic of gun violence in our country. She fears Kavanaugh will roll back the few protections against gun violence currently in place if he is confirmed.

“Today was my first day of school and my greatest anxiety was not who I would sit with at lunch but whether I would survive the day. This country is supposed to care about its people. But Kavanaugh loves guns almost as much as he hates abortion.” #ParklandStrong #StopKanavaugh pic.twitter.com/CTAJc85fNz

We were also thrilled to see that several senators, members of Congress, and aspiring politicians made it to the rally to show their opposition to Kavanaugh’s nomination. Deb Haaland, a congressional candidate from Arizona who would be the first indigenous woman elected to Congress, stood with a group of Native American women and explained the unique issues they are facing and how Kavanaugh’s lower court record indicates that he will always side against indigenous communities.

“I’m so thrilled to be here with a beautiful group of indigenous women. Keep marching. Keep protesting. Make sure the entire country knows we don’t want Brett Kavanaugh on the Supreme Court.” –@Deb4CongressNM #StopKanavaugh pic.twitter.com/yIfaiP3FgB

Senator Patty Murray, D-Wash., Senator Jeff Merkley, D-Ore., Representative Barbara Lee, D-Calif., and Representative Jan Schakowsky, D-Ill., also gave speeches, each explaining how Kavanaugh can be stopped and how important it is for constituents to reach out to their representatives when so much is on the line. Sen. Merkley also pointed out that all Supreme Court appointments should be suspended while the president is under federal investigation.

“There are so many reasons to say no. Let’s start with the fact that the president is under investigation.” –@SenJeffMerkley #StopKavenaugh #scotus #WhatsAtStake pic.twitter.com/KS7HWWQd4c