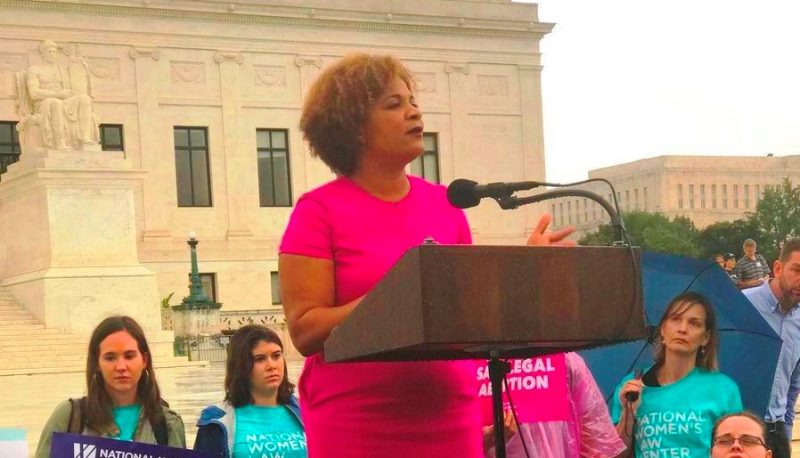 Earlier this week PFAW joined a coalition of advocacy groups including the National Women’s Law Center, the Center for American Progress Action Fund, and the Constitutional Accountability Center in a rally against President Trump’s Supreme Court nominee Brett Kavanaugh.

Although Brett Kavanaugh had already shown himself unfit for a lifetime appointment to the Supreme Court, the reasons to oppose his nomination have grown exponentially in light of the serious allegations of sexual misconduct made by Dr. Christine Blasey Ford. In a call for a full, fair, and thorough assessment of Dr. Ford’s allegations, a number of groups came together to voice new concerns about the nominee and demand that the Senate halt the nomination process until there can be a full investigation.

“I believe Christine Ford. I believe Anita Hill. I believe every woman who wants to come forward and share their truth.” –@neeratanden #StopKavanuagh pic.twitter.com/huXx7Z7Oif

One prominent speaker was Kris Perry, the plaintiff in Hollingsworth v. Perry, which challenged California’s infamous Proposition 8.  She discussed how her case, which affected thousands of families, hinged on a single justice’s vote. Similarly, Mary Beth Tinker, the plaintiff in Tinker v. Des Moines Independent Community School District, which recognized students’ First Amendment right to wear armbands in public schools to protest the Vietnam War, also spoke about her experience of fighting for her First Amendment rights as a teenager. She stated that young people can be the best driving force for progressive change, and asked that everyone keep fighting for a fair and balanced Supreme Court.

Jamie Davis Smith from Little Lobbyists told the story of how her daughter was born with a chronic condition and struggled to get the health care coverage she needed. For a time, Davis Smith even considered divorcing her husband in order to qualify for Medicaid as a single parent. She is an activist for expanded health care coverage so that families like hers do not have to make these tough decisions, and explained that Kavanaugh’s judicial record on health care issues puts her daughter in danger of losing coverage.

“There are millions of children and families across the country who face fear and uncertainty [of losing healthcare] if Kavanaugh is confirmed.” -Jamie Davis Smith, Little Lobbyists #StopKavanaugh #SCOTUS pic.twitter.com/vBLr4lg23x

Finally, many of the speakers focused on how the Senate Judiciary Committee should approach Dr. Ford’s allegations and voiced concerns that they are rushing through the proceedings. Fatima Gross Graves of the National Women’s Law Center spoke out about how Anita Hill’s testimony and the way she was treated by the Senate during Clarence Thomas’ nomination is a “stain on our country,” and asked that Congress not repeat the mistakes of 1991. Neera Tanden from Center for American Progress Action Fund argued that confirming Kavanaugh would send a horrible message to our daughters, and emphasized the importance of approaching accusations with the assumption of belief. Marge Baker of People For the American Way pointed out that the hearings have already been rushed and demanded a fair and unbiased analysis of Dr. Ford’s accusations before the nomination moves any further forward.

“We have to demand that this hearing is fair, impartial, and addresses the allegations against Brett Kavanaugh.” -Marge Baker of @peoplefor #stopkavanaugh pic.twitter.com/HU9U6Qacqp