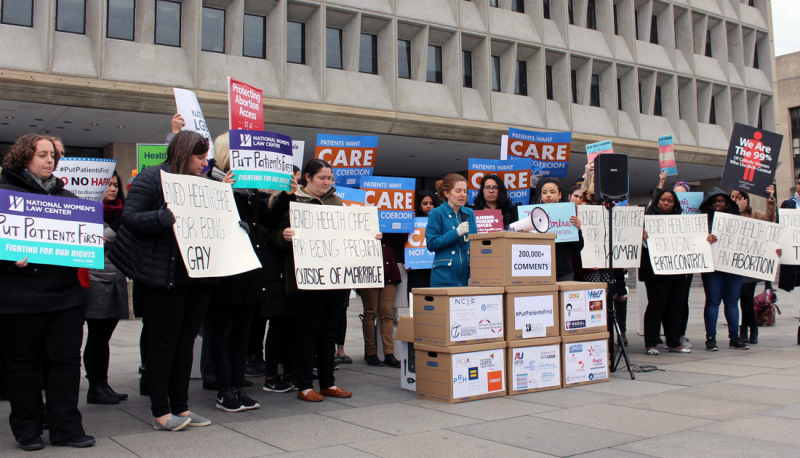 Back in January, the Department of Health and Human Services released a damaging religious refusals rule that will undoubtedly lead to even more flat-out denials of care for those already facing health care discrimination, particularly women and LGBTQ people, people of color, and rural Americans. This is an affront to HHS’s mission of service to all. The proposed rule must be withdrawn.

On March 27, People For the American Way cohosted a rally outside HHS and delivered more than 200,000 comments from activists like you urging HHS to put patients first.

Herrick was joined by speakers from the National Women’s Law Center, the National Center for Transgender Equality, the Human Rights Campaign, and eleven other organizational allies from among more than thirty groups that collected comments.

In addition to the PFAW activists who commented, PFAW also submitted organizational comments to HHS. Our letter’s introduction follows below. Click here to download a PDF copy of the full letter.

I am writing on behalf of People For the American Way (“PFAW”) in response to the request for public comment regarding the proposed rule by the Department of Health and Human Services (“HHS”) entitled, “Protecting Statutory Conscience Rights in Health Care” published January 26, 2018. PFAW is a progressive advocacy organization established to promote and protect civil and constitutional rights, including religious liberty and freedom from discrimination. Founded in 1981 by a group of civic, educational, and religious leaders, PFAW now has hundreds of thousands of members nationwide. Over its history, PFAW has conducted extensive education, outreach, legislative and regulatory advocacy, and other activities to promote these values. PFAW strongly supports the principle that the First Amendment and appropriate federal law and regulations should be a shield for the free exercise of religion, protecting individuals of all faiths. PFAW is concerned, however, about efforts to transform this important shield into a sword to obtain accommodations that significantly harm others, which also violates the Establishment Clause.