Today PFAW and our allies organized a rapid response counter protest at the Supreme Court to interrupt a press conference held by Senate Judiciary Committee Chairman Chuck Grassley and other Republican senators calling for confirmation of Judge Neil Gorsuch.

On short notice, a crowd of protestors assembled to demonstrate opposition to Judge Gorsuch’s nomination to the Supreme Court, chanting “don’t change the rules, replace the nominee” and “Neil’s a bad deal.” The chants continued throughout the press conference, at times drowning out the senators’ remarks. 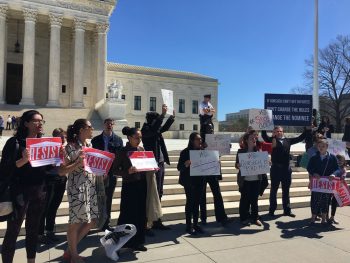 This action comes after weeks of coalition work to mobilize the substantial public opposition to Gorsuch. More than one million petition signatures have been delivered, numerous days of action held, and tens of thousands of calls have been driven into the Senate demanding that they #StopGorsuch.