Romney Says Teachers’ Unions Shouldn’t Be Able to Contribute to Campaigns, But Corporations OK - People For the American Way
Skip to main content

But it turns out there’s one group that Romney thinks should be prohibited from spending money to influence elections: teachers’ unions. Speaking at a forum in New York, Romney expressed his wish for one specific campaign finance restriction:

The bigger problem, Romney said, is that "the person sitting across the table from them should not have received the largest campaign contribution from the teachers union themselves … [It’s] an extraordinary conflict of interest and something that should be addressed."

He later added that "we simply can’t have" elected officials who have received large contributions from teachers sitting across from them at the bargaining table "supposedly" to represent the interests of children. "I think it’s a mistake," Romney said. "I think we have to get the money out of the teachers unions going into campaigns. It’s the wrong way for us to go. We’ve got to separate that."

Romney’s absolutely right that large campaign contributions and expenditures can improperly influence elected officials. But if he’s going to apply that standard to teachers, he needs to apply it to corporations as well. 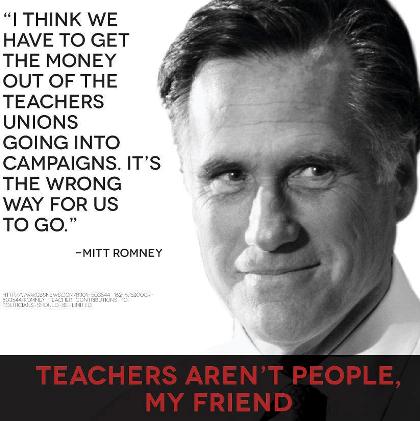