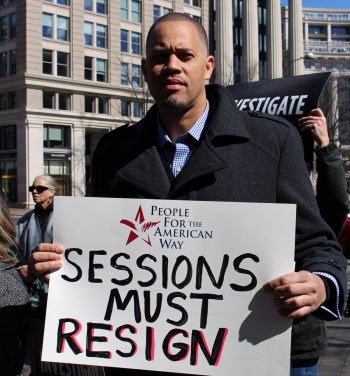 Last week Attorney General Jeff Sessions ordered a review of reform agreements that are currently in place with a number of police departments across the country. Baltimore activist Kwame Rose wrote that with this action, Sessions “essentially gave police permission to…continue to target the black community.”

This is an extremely troubling development that threatens to undermine any progress made so far in addressing police use of force in Black communities. We can’t stand silently and let Sessions turn back the clock.

The Trump era has ushered in unprecedented challenges that have caused communities to mobilize and react to assaults on many different fronts, including heath care, immigration and public education.  Even with these attacks that are coming in all directions, an increased focus on proactive strategies for meaningful change around policing policies must remain front of mind—especially given Sessions’ announcement.

Put simply: this work must remain a top priority. We cannot afford to wait until the next tragedy to advocate and push for policy change!

The safety of our communities depends on a thoughtful policy agenda focused on reducing the use of excessive force by police as they engage with Black communities. We already have a blueprint for what this agenda might look like. During the Obama administration, the Department of Justice convened The President’s Taskforce on 21st Century Policing. In May 2015 that taskforce released a final report that examined several pillars of good policing, with detailed recommendations included in each category.

In addition, advocacy and policy organizations focused on this issue have compiled many thoughtful strategies. The Advancement Project and PolicyLink published a report in October 2014, “Beyond Confrontation: Community-Centered Policing Tools,” that included seven strong principles for police reform:

But with Sessions now heading the Department of Justice, and especially given his record on race and policing, it will be even more important for local, state and national leaders to strongly advocate for thoughtful implementation of the recommendations of the presidential taskforce and those of advocacy groups working on this issue.

It’s important to remember that the burden for change does not solely rest with police. It is our civic responsibility to fight for safe and accountable policing in Black communities and to lead a conversation that catalyzes real policy change.

This starts with communities pushing elected leaders to address the realities that exist in those communities, and to set standards and practices that speak to the needs and values of the communities that police work in. It also must stand on a foundation of trust that is built on strong relationships within the communities being served. In Baltimore, for example, the mayor, city council members, police commissioner, and residents all supported a reform agreement—or “consent decree”—for the city’s police department. Though Sessions sought to delay it from going into effect, a district court judge approved the decree on Friday, representing a win for the local community. To move cities closer to needed reform, police need to be connected to the community and to reflect the values established by that community.

Reports highlighting solutions can show us the way forward, but they cannot just live on a shelf. Recommendations must be implemented for change to become real. We must push Attorney General Sessions to reverse course and to follow up on the recommendations already developed—and call on our elected leaders to fund and implement change.

The push for safe and accountable policing is a life-or-death issue, and one that must remain a top priority going forward.