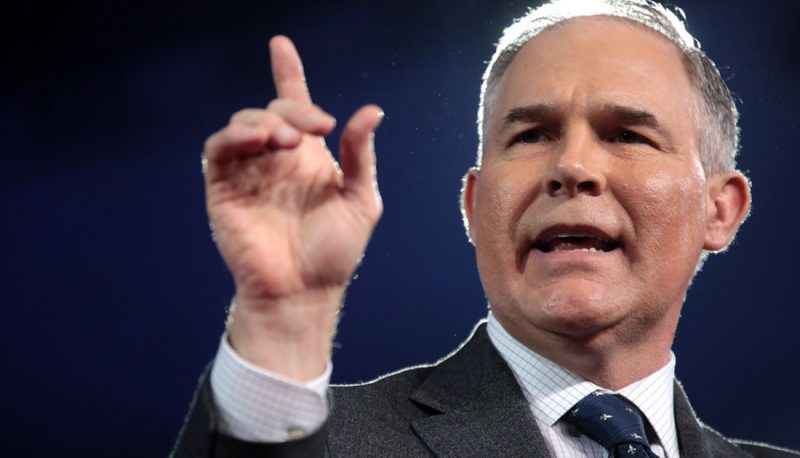 UPDATE: Scott Pruitt has announced that he will no longer be attending the OKGOP Gala, citing the ethics concerns raised about his scheduled appearance.

This week Senator Sheldon Whitehouse (D-RI) filed a complaint with the Office of Special Counsel (OSC) against EPA Administrator Scott Pruitt over a conflict of interest and potential violation of the law. The complaint calls for an investigation into whether Pruitt is in violation of the Hatch Act by agreeing to appear as the keynote speaker at an upcoming Oklahoma Republican Party (OKGOP) event.

The Hatch Act limits members of the executive branch in their ability to participate in certain political activities. An executive branch employee is prohibited from using their “official authority or influence for the purpose of interfering with or affecting the result of an election.”

Federal law stipulates that “the employee’s official title may not appear on invitations to any political fundraiser.”

The invitation for the OKGOP event seems to be in clear violation of the rule. As cited in the complaint:

There is a strong impression from the invitation that by purchasing a ticket or otherwise sponsoring the OKGOP event, an attendee will have special access to Pruitt—a cabinet member discussing official actions already taken and actions he plans to take in the future. As Senator Whitehouse contends, this is in blatant violation of the Hatch Act.

Scott Pruitt has a well-established record of advancing the interests of the same industries he now regulates. Prior to becoming Trump’s EPA administrator, he served as Oklahoma attorney general, where he consistently sided with industry, cut enforcement and dismantled environmental regulation. Since the early days of his political career as a state senator, he has taken hundreds of thousands of dollars in campaign contributions from fossil fuel companies. His appearance at this political fundraiser, in addition to his publicly-documented ties to various industries, suggests a pattern of behavior that warrants further investigation.