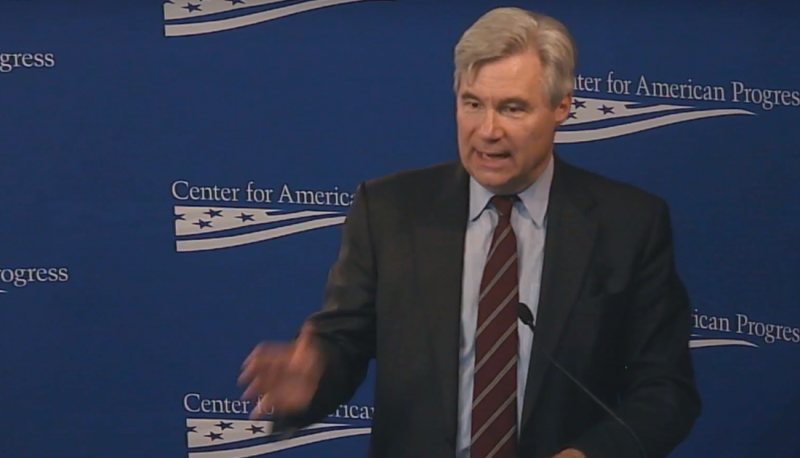 This week, the Center for American Progress hosted a panel discussion on a key area of concern for People For the American Way and our members: the intersection of money in politics and the judicial system. The program included remarks from Senator Sheldon Whitehouse (D-RI), who has been an outspoken champion on this issue and a leader on the Senate Judiciary Committee, which plays an instrumental role in the federal judicial nominations process.

The senator’s remarks built on those he gave on May 17 during a Senate Judiciary Committee session, where he expressed grave concerns about two judicial nominees in particular, as well as the current nominations process as a whole. As the senator said, when secret money donors are spending $18 million in the judicial selection business, there is more going on than just evaluation on the merits.

The outsized influence of big money denigrates the integrity of the entire judicial selection process and calls into question the allegiance of nominees, many of whom have been groomed since law school by the very same interests that bankroll their confirmation fights. To think that donors don’t expect to get something they want from the large sums of money being spent on the judicial nominations process is naive at best. We need to look no further than the record of Justice Neil Gorsuch to see this in action, who had millions of dollars spent on his behalf, and is now a vote in favor of the rich and powerful on the Supreme Court.

While the Trump administration is wreaking havoc on justice and democracy in more ways than one, the impact on the judiciary may prove to be the most lasting. With Trump filling federal judicial vacancies — which are lifetime appointments — with young ideologues at a record pace, the effects of the decisions these judges make will be felt for decades, if not longer.”

Without fixing the systemic flaws that allow unchecked secret money into our political system, these problems may only continue to get worse.