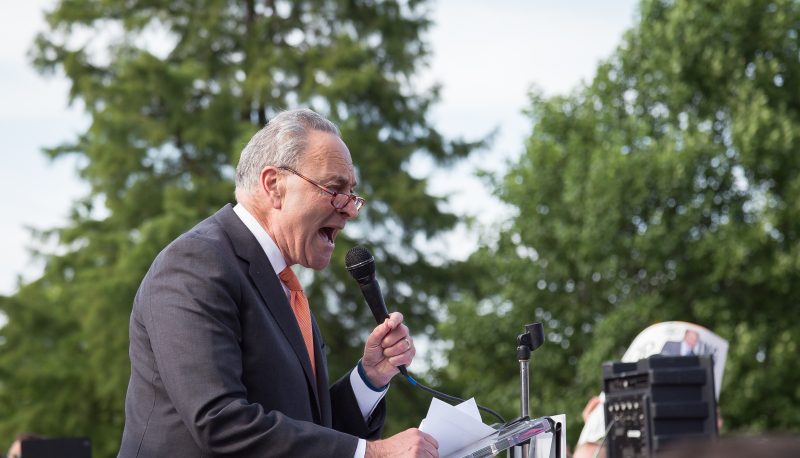 "Linking Together: March to Save Our Care" Rally at the U.S. Capitol on June 28, 2017. Democratic Party Leaders and others spoke to defend the Affordable Care Act and to defeat Republican Party efforts to repeal so called "Obama Care" and replace it with "Trump Care" alternatives.

On Monday evening PFAW was joined on our member telebriefing by Senate Democratic Leader Chuck Schumer. Senator Schumer thanked PFAW members for their activism which has led to hard-fought wins during the Trump administration. But he also had an urgent warning for our members: “Repeal of health care has risen its ugly head once again.”

Senator Schumer went on to explain that the Republicans have brought back the repeal of the Affordable Care Act through the Graham-Cassidy bill, which is even worse than its predecessors. He told us that they’re trying to ram the bill through before September 30, when they will only need 50 votes to pass it.

“This is not to be taken lightly, it is not a false alarm,” Senator Schumer said.

Senator Schumer gave us this call to action: “Please tell Republicans to oppose this effort to bring up Graham-Cassidy instead of focusing on the bipartisan negotiations which we should be doing.”

And he also shared some important messaging points for activists:

During the time Senator Schumer had, he also talked about several other issues that are important to our members. One was Trump’s voter suppression commission, which he called a “sham commission.” Discussing one of the commission’s leaders, he said “Kris Kobach is someone I have no respect for — his integrity, his honesty, fidelity to fact. He just viciously wants to prevent people from voting.”

Senator Schumer said that he is looking for a way to end the commission.

And he assured us that he is working against the Republican agenda to pack the courts with extremists. On the issue of blue slips, Senator Schumer assured PFAW members that he was in alignment with us on this and that he is doing all he can to protect this critical procedure:

“Now we have the circuit court, and the blue slip has always been recognized. I will be meeting with Senator McConnell, Senator Grassley, and the ranking Democrat on the committee, to make the case to hold the blue slips.”

The call continued with PFAW Executive Vice President Marge Baker and Digital Organizing Coordinator Bradley Williams who gave advice to members on how to be active and involved in these critical issues.

Baker emphasized that there is a “rich set of Republican targets” who have not confirmed their position on the horrific new health care repeal bill, and that our members should do all they can to pressure these members to do the right thing. (One thing you can do — sign our petition here!)

She said that our other priorities are to focus as much attention as we can on the sham voter suppression commission—their last meeting was a disaster, and it is very clear that their agenda is about voter suppression.

Baker discussed our lawsuit against DOJ to get the documentation that Attorney General Jeff Sessions says is the reason he failed to disclose meetings with Russian operatives on his security clearance form. And finally, she talked about our efforts around judicial nominations—Democrats are under attack for being responsible and being intentional about their use of blue slips for judicial nominations.

Bradley Williams emphasized that “we’re in the fight of our lives right now.” He shared some member stories about their experiences with health care and how health care repeal would hurt them and their communities.

He also shared ways that people can get involved locally—to write letters to the editor and attend rallies in your area. He encouraged members to tag us on social media and reach out to us at resist@pfaw.org if you need our help so that we can continue to amplify the awesome efforts of our members.

Thank you for listening!

Please call this toll-free number to connect with a key senator and urge them to REJECT Trumpcare: 1-866-426-2631.

Hear the call in its entirety here: