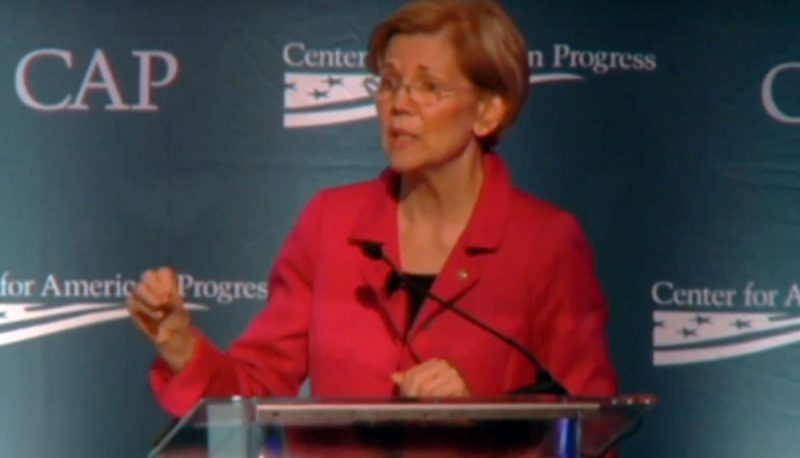 Senator Elizabeth Warren just delivered a powerful keynote address at the Center for American Progress Ideas Conference. Among a wide range of pro-democracy issues, Senator Warren once again condemned the Supreme Court’s ruling in Citizens United that paved the way for corporations and wealthy donors to be able to spend unlimited money to influence elections. Warren called not only for a reversal by the Court but also for a constitutional amendment to restore the democratic promise of America.

We can start that change with the way political campaigns are financed and build on the foundation many American cities and states have established with publicly-funded elections. But we need more.

Regulatory process must be reformed so that giant companies cannot bury public servants in an avalanche of nonsense and stand in the way of progress every time the government tries to act in the public interest.

It’s time to slow down the revolving door and stop corporations that pay employees barely-disguised bribes to take public jobs.

And as we fight for a Supreme Court that will reverse its terrible Citizens United mistake, we must also build the movement across this country to pass a constitutional amendment that will allow us to shut off the spigot of cash that is drowning our government.

There’s more, but these steps are a good start toward taking down the “Government for Sale” sign that currently hangs over Washington, D.C.

Senator Warren is an original cosponsor of the Democracy For All Amendment championed by Senator Tom Udall, Representatives Ted Deutch, James P. McGovern, and Jamie Raskin, and more than 130 other members of Congress. She hails from Massachusetts, where not only has the state legislature called on Congress to propose such an amendment but so have more than 200 local communities. Nationwide, 136 million Americans—44 percent of the U.S. population—live in a state or locality that has joined the amendment movement.

People For the American Way has been fighting big money in politics since the Supreme Court decided Citizens United in 2010. In particular, PFAW has joined Senator Warren and her colleagues on the Democracy For All Amendment, which provides, in a simple and straightforward way, that Congress and the states have the authority to regulate and limit the raising and spending of money to influence elections. We believe that this proposal will help put our democracy back in the hands of “We, the People.”

If you haven’t taken action yet, you can add your name now: stand with PFAW to overturn Citizens United.