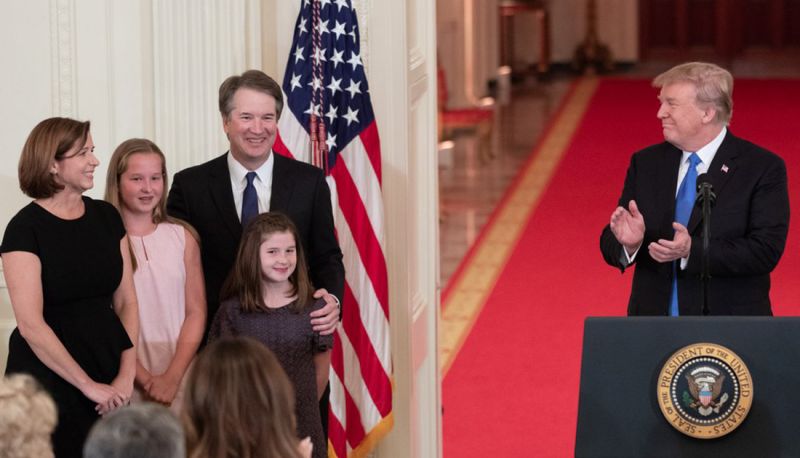 Nomination ceremony for Brett Kavanaugh at the White House.

On July 11, following Trump’s nomination of Brett Kavanaugh to replace retiring Supreme Court Justice Anthony Kennedy, People For the American Way hosted a member telebriefing about Kavanaugh and the threat he poses to the judiciary and to the American people.

Sen. Elizabeth Warren, D-Massachusetts, began by thanking PFAW members for calling in and for being active at such a pivotal moment. She emphasized that Kavanaugh is up for a lifetime seat on the Supreme Court, and the impact he can have there should not be underestimated. She underscored, “We are in the fight of our lives. It is time we raise our voices like we have never done before” to ensure that the Senate hears the concerns of every American. Sen. Warren also emphasized that although the road ahead won’t be easy, there is a clear path to victory to stop Kavanaugh’s confirmation.

PFAW President Michael Keegan added that the timing of the fight for Kennedy’s vacant seat–just months before midterms in November–offers progressives a fighting chance to oppose Trump’s dangerous agenda. Keegan said that the fight to stop Kavanaugh is winnable if people all across the country unite and understand the stakes; it only takes one vote to win. He finished by telling members to make certain their senators understand that a vote for Kavanaugh will have consequences at the ballot box come November.

Marge Baker, PFAW Executive Vice President, detailed Kavanaugh’s career prior to his judgeship on the D.C. Circuit Court of Appeals, and described him as a political operative for the conservative movement. Elliot Mincberg, senior fellow at PFAW, went on to outline Kavanaugh’s atrocious record on the federal bench, calling him a “partisan warrior on the court.” Kavanaugh has served on the D.C. Circuit for 12 years, and in that time, he has dissented from both his liberal and conservative colleagues more than any other judge, consistently ruling against corporate accountability, and the rights of women, workers and consumers.

Sen. Cory Booker, D-New Jersey, also reiterated Kavanaugh’s concerning past and his dangerous record as a circuit judge. Booker emphasized that 50 years of progress for individual rights—including marriage equality, a woman’s right to choose, voting rights, civil rights, checks on corporate power and net neutrality—are at stake.  Sen. Booker finished by encouraging members to remain hopeful in the face of such adversity saying, “You can’t have great hope without great despair. And hope is the active conviction that despair will never have the last word.”

Baker also highlighted Trump’s litmus test for his Supreme Court justices: a promise to overturn Roe v. Wade and gut the ACA.  She added that with Kavanaugh’s nomination it became clear that Trump had a third test—someone who agrees that the president is above the law. Kavanaugh is the only person on Trump’s shortlist of the Federalist Society and Heritage Foundation’s approved candidates that has written extensively on his beliefs that a sitting president should have absolute discretion on whether and when he is investigated and by whom; and who does the investigating. In addition, he believes that a special prosecutor should be removable at will by a president, and that a president should not be the sole subject of a criminal investigation. Baker stressed that Kavanaugh’s personal writings and legal record indicate that he will do Trump’s and the Right’s bidding.

PFAW Vice President for Communications and Research Drew Courtney finished by reminding members to call their senators and to make sure their friends and families know what’s at stake. He closed the call with a quote from President Obama, “If something needs fixing, then lace up your shoes and do some organizing.”