#StopGorsuch: Trump’s Nominee Would be a Nightmare for Women 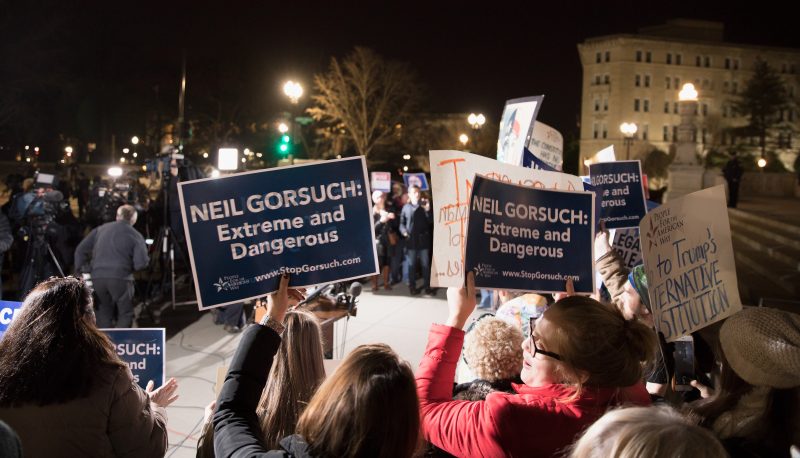 Neil Gorsuch, President Trump’s nominee for the Supreme Court seat vacated by Antonin Scalia, has been referred to as “Scalia with a smile.” But his record shows that for women, his smile is more of a sneer. On a range of issues that impact women—from employment discrimination to access to contraceptives to LGBTQ rights—Gorsuch has a dangerous habit of ruling against women’s rights.

Gorsuch has previously voted against a woman who alleged discrimination at work based on gender. In Strickland v. UPS he dissented from a ruling that would have allowed Carole Strickland, a female UPS employee, to prove sex discrimination at work. Despite matching or outperforming male colleagues in sales, Strickland was required to attend meetings and counseling sessions with supervisors while male colleagues were not. But apparently to Gorsuch, that’s not sufficient evidence to even allow for the chance to prove in court that sex discrimination occurred. Gorsuch’s anti-worker tendencies are alarming anyway, but women have another reason to worry given his dissent in Strickland.

Reproductive rights are another arena in which Gorsuch has ruled against women. Ruling in the original Hobby Lobby decision, the case that eliminated the Affordable Care Act’s birth control mandate, Gorsuch joined the majority and held that corporations are “persons” who can exercise the freedom of religion for the purposes of the Religious Freedom Restoration Act. Got that, ladies? Corporations are people, and their rights supersede yours.

As if all of that wasn’t enough, Gorsuch, a member of the Federalist Society which also boasts Antonin Scalia, Clarence Thomas, and Robert Bork as alumna, wanted to allow the governor of Utah to defund the Planned Parenthood Association of Utah (PPAU). PPAU obtained an injunction against the Governor’s actions to cut off funds to their health centers in the state, and Gorsuch dissented from a denial of a suggestion to rehear the case. In his 2009 book, “The Future of Assisted Suicide and Euthanasia,” Gorsuch asserted, “human life is fundamentally and inherently valuable, and that the intentional taking of human life by private persons is always wrong,” a line that has anti-choice writers and activists applauding. As innocuous as this statement sounds, it actually uses the coded language of the anti-choice movement. So we can all take a guess at how he’s going to vote if any abortion-related case ends up in front of him at the Court.

It doesn’t end there. Gorsuch also has a record of ruling against the rights of transgender women. In one instance, he joined in a decision that held that giving a transgender woman prisoner lower than recommended doses of estrogen and housing her in a men’s prison was not “cruel and unusual punishment.” In another decision, Gorsuch agreed that not allowing a transgender woman to use the women’s bathroom was discrimination, but affirmed that her employer had put forth legitimate reasons for not allowing her to use the women’s restroom—agreeing that there were “safety reasons.” Of course, transgender people using the restroom of their choice poses no threat to anyone, and there’s scant evidence to believe otherwise.

Gorsuch has a clear history of ruling against myriad women’s rights in court, and there is no evidence that he would stand up to Trump’s overreach of executive power. Given what we’ve seen of Trump’s opinion of women—the numerous accusations of sexual harassment and assault, comments about “punishing” women who have abortions, and dropping the defense of Obama’s rules to protect transgender students—it’s safe to say we’re going to need a strong barrier on the Court against his attacks, and Gorsuch is not going to be that barrier.