Study: Roberts and Alito Most Pro-Corporate Justices in 65 Years

We write frequently about the extraordinarily pro-corporate leanings of the current Supreme Court, where the Justices bend the law and twist logic in order to rule in favor of large corporate interests and against the rights of individuals harmed by those interests. In the past week, two new studies have provided powerful numbers to back up the trend.

In a report released on Thursday, the Constitutional Accountability Center found that the corporate lobbying group U.S. Chamber of Commerce has won a stunning two-thirds of the cases that it has been involved with before the Roberts Court. And this weekend, The New York Times reported on a new study from the Minnesota Law Review that found that the current Supreme Court’s five conservative justices have sided with corporate interests at a greater rate than most justices since World War II. In fact, Chief Justice John Roberts and Justice Samuel Alito, both George W. Bush nominees, are the two most pro-corporate Supreme Court justices to sit in the past 65 years: 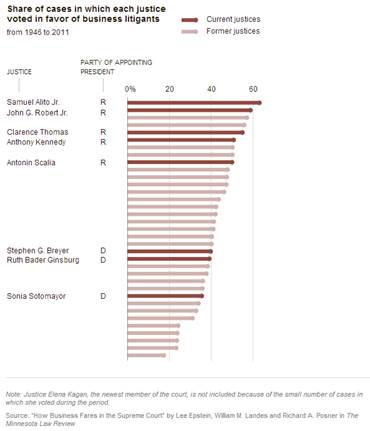 But the business docket reflects something truly distinctive about the court led by Chief Justice John G. Roberts Jr. While the current court’s decisions, over all, are only slightly more conservative than those from the courts led by Chief Justices Warren E. Burger and William H. Rehnquist, according to political scientists who study the court, its business rulings are another matter. They have been, a new study finds, far friendlier to business than those of any court since at least World War II.

In the eight years since Chief Justice Roberts joined the court, it has allowed corporations to spend freely in elections in the Citizens United case, has shielded them from class actions and human rights suits, and has made arbitration the favored way to resolve many disputes. Business groups say the Roberts court’s decisions have helped combat frivolous lawsuits, while plaintiffs’ lawyers say the rulings have destroyed legitimate claims for harm from faulty products, discriminatory practices and fraud.

Published last month in The Minnesota Law Review, the study ranked the 36 justices who served on the court over those 65 years by the proportion of their pro-business votes; all five of the current court’s more conservative members were in the top 10. But the study’s most striking finding was that the two justices most likely to vote in favor of business interests since 1946 are the most recent conservative additions to the court, Chief Justice Roberts and Justice Samuel A. Alito Jr., both appointed by President George W. Bush.