Ten states are holding primaries and caucuses today, earning March 6th the title of “Super Tuesday.” Participants will show up, cast their vote, and hopefully feel good for participating in the democratic process and fulfilling their civic duty.

But thanks to Citizens United, and the Super PACs that flawed decision gave rise to, the voters are not the stars of this show. An outpouring of cash from a few extremely wealthy donors has dramatically altered the campaign landscape, altering the balance of influence from individual donors and grassroots donors to rich special interests and corporations. 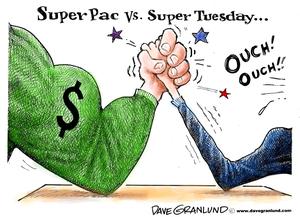 As illustrated above by Dave Granlund, tonight’s contests should really be called Super-PAC Tuesday. NPR reports that in the ten states up for grabs, Super PACs have spent a whopping $12 million for ads:

Leading the way is Restore Our Future, the superPAC that backs former Massachusetts Gov. Mitt Romney. According to Federal Election Commission numbers, Restore Our Future has spent $6.9 million on the Super Tuesday states.

"The groups have clearly taken the lead in advertising for the whole Republican primary. They’re very much taking the lead in advertising for Super Tuesday. It’s mostly the ‘Restore Our Future show,’ followed by Winning Our Future, which is the Gingrich group, and Red, White and Blue, which is the Santorum group," says Ken Goldstein, who tracks political ad spending for Kantar Media CMAG.

Red, White and Blue has spent some $1.3 million on Super Tuesday, and has been running an ad in Ohio that goes after Romney for his alleged similarities to the man all Republicans want to defeat in November: President Obama.

These ads supposedly (and unconvincingly) act independently from a candidate’s official campaign, meaning that candidates are unaccountable for their content. But as Katrina vanden Huevel points out in today’s Washington Post, these superPACs reach “barely a legal fiction,” populated as they are with former staff and fundraisers for the candidates they “independently” support.  And this is in addition to the spending by 501 c-4 organizations the sources for which do not even have to be disclosed.

This is not what democracy looks like. We have to end unfettered political spending in our elections system – and solutions like the DISCLOSE Act and a constitutional amendment to overturn Citizens United are gaining steam. $12 million worth of ads on Super-PAC Tuesday alone should convince everyone that enough is enough.