Thank You for the Supreme Court Fight 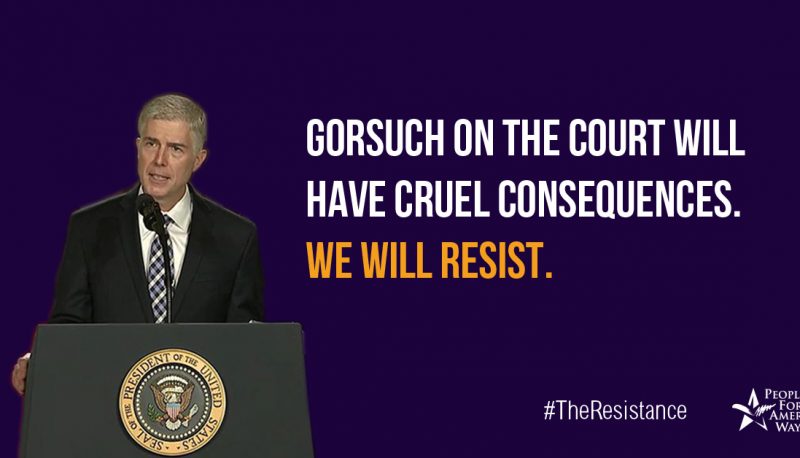 Thank you so much for every bit of money, time, energy, and passion you have given to this Supreme Court fight.

It’s a fight we needed to be in and, even though Neil Gorsuch will now become a Supreme Court justice, the progressive movement won in some big ways by fighting with everything we had.

Together, we exposed Gorsuch for the dangerous extremist he is. And we mustered the votes to block his confirmation under the longstanding rules.

We did not make Mitch McConnell and every single Republican senator change those rules – by pulling the trigger on the “nuclear option” to ram Gorsuch through with a simple majority. That was their choice – one that exposed their lack of integrity and lack of respect for our democracy. And it was a tremendously unpopular choice that we are going to do everything we can to make them pay for in 2018 and beyond.

Republicans have shown over these last several years that they live by what Washington Post columnist E.J. Dionne called “the politics of power-grabbing and bullying.” It was time for Democrats to stand up for our constitutional rights, and with very few exceptions, stand up they did.

But the reason they stood up was because of grassroots pressure and your incredible efforts. Red-state Democrats like Jon Tester, Claire McCaskill, and others deserve our appreciation. And Minority Leader Chuck Schumer was nothing short of a hero in championing our cause in the Senate and doing what was needed to rally his caucus to deny Gorsuch 60 votes.

Those who said this fight wasn’t worth it or that we should have waited until the next Supreme Court nomination, perhaps to fill the seat of one of the current moderates on the Court, have misread the reality of the Republicans’ fanatical commitment to pursuing a right-wing agenda at all costs. McConnell would have just pulled this move to ram through the next nominee, another one hand-picked by right-wing extremists. It would have been a grave mistake not to stand up and call out Senate Republicans’ unyielding extremism in this fight.

Because the progressive movement and most Senate Democrats stood up, we’ll be in a better position for the next fight. Laying down and giving in without a fight would have been a disaster for the resistance movement over the hard four years to come.

There’s no sugarcoating the sad fact that Gorsuch is an extremist who will do vast harm to countless Americans on the Supreme Court. But there is value in fighting. And from this fight, future victories will be born.

You should feel immensely proud of all that you have done, for all that we have accomplished together, and for all that we will accomplish as we work tirelessly to hold Republicans accountable for their reckless power grab.