The D.C. Circuit and the ‘Transformation of the First Amendment’

Garrett Epps writes today in The Atlantic about how the D.C. Circuit Court of Appeals, still dominated by far-right George W. Bush nominees, has been instrumental  in “the long, doleful transformation of the First Amendment from an individual right of conscience into a shield against business regulation.”

He focuses on the latest example of right-wing D.C. Circuit judges twisting the Constitution to favor corporations over workers and consumers:

We've read of the violence done to the National Labor Relations Board by the D.C. Circuit's December decision in Noel Canning v. NLRB. Having read that opinion repeatedly, I believe it does violence to the Constitution as well. The D.C. Circuit last year voided a Food and Drug Administration regulation requiring graphic warning labels on cigarette labels as a violation of tobacco companies' "free speech" rights — to me, another grave misstep. And I feel the same way about the Circuit's decision this week in National Association of Manufacturers v. NLRB. In this case, three Republican nominees held that the First Amendment's right against "compelled speech" protects employers against an NLRB regulation requiring them to post a government poster notifying workers of their rights. The decision is another step on the long, doleful transformation of the First Amendment from an individual right of conscience into a shield against business regulation.

We posted an infographic yesterday that shows just how ideologically skewed the D.C. Circuit is. George W. Bush made a concerted effort to pack the court with judges who shared his right-wing ideology (including John Roberts, who went on to be one of the top two most pro-corporate Supreme Court Justices in the past 65 years). In contrast, President Obama is the first president since Woodrow Wilson to not place a single judge on the court during his full first term. 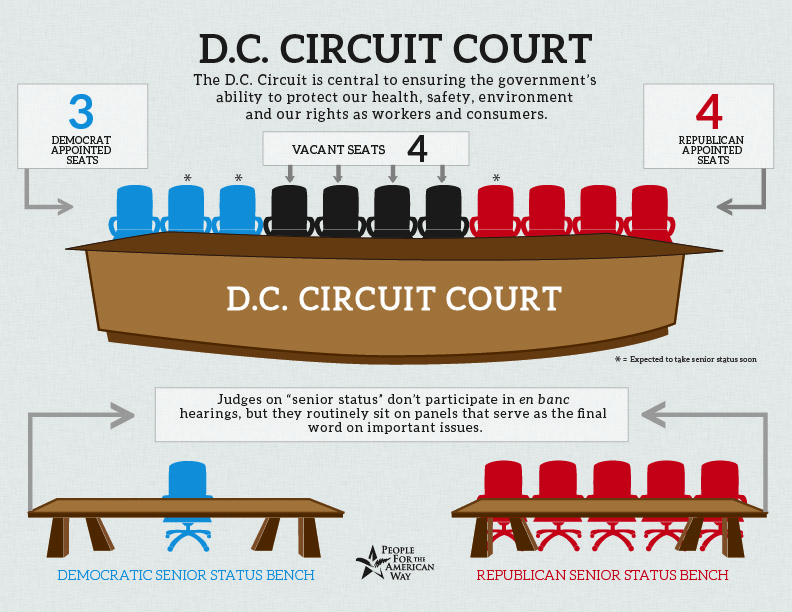