“Forward together, not one step back” were the chants heard in every space we entered while we marched for voters’ rights in Winston-Salem, North Carolina last month. On July 13, Young People For (YP4) community college consultant Lela Ali, African American Ministers Leadership Council (AAMLC) administrative assistant Jasmine Bowden, and I participated in the Mass Moral Monday march and rally hosted by the North Carolina State Conference of the NAACP to share our voices and energy in the fight against the 2013 North Carolina law (H.B. 589) that advocates have called “the worst voter suppression law in the country.” 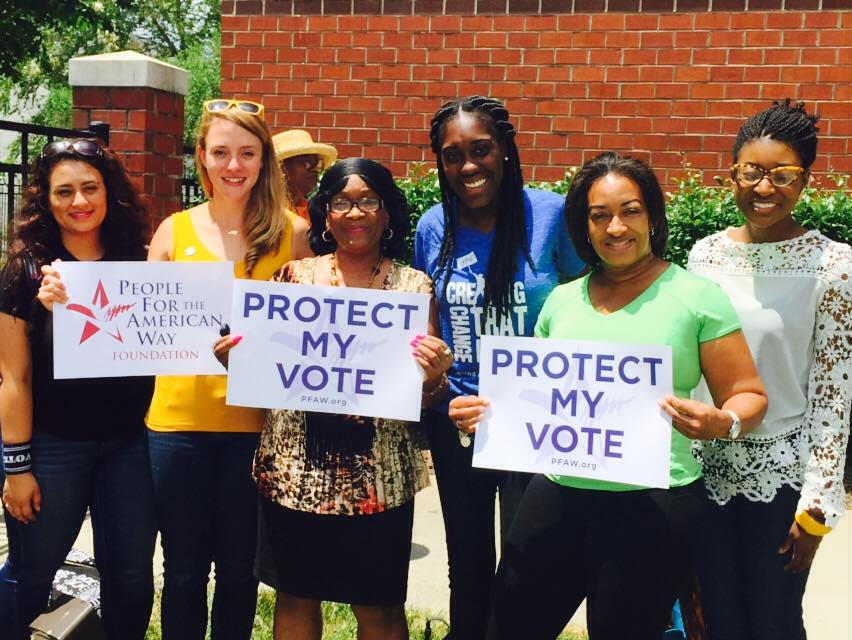 Community and religious leaders performed sit-ins three years ago in the North Carolina State Senate resulting in arrests opposing the voter suppression law. One month later, the North Carolina NAACP and Rosanell Eaton filed a complaint in federal district court due to the bill’s violations under the 14th and 15th Amendments to the U.S. Constitution. This history was uplifted by North Carolina NAACP State President Reverend William Barber, II – who is also an AAMLC member – at an ecumenical service at Union Baptist Church Sunday evening. He gave a great sermon titled “Necessary Interruption,” saying that allies and activists are being called to disrupt our nation in order to dismantle the systems of oppression that plague our country and leave behind countless black deaths with little consequences. He spoke on the need for Medicare expansion, policy changes like gun laws and criminal justice reforms, and economic empowerment for marginalized communities.  The North Carolina NAACP v. McCrory lawsuit, which challenges the provisions of embedded in H.B. 589, is one of those necessary interruptions of justice.

With a fiery ending to our first night in Winston-Salem, we were excited for the full day of teach-ins that occurred the next morning. We were hosted by Goler Memorial African Methodist Episcopal Church and engaged in various topics from ‘Racial Violence & Criminal (In)Justice’ to ‘Building Coalitions to Sustain a Social Justice Movement.’ Many of our conversations were focused around allyship, direct action, and legal support to dismantle systems of inequity in local communities. We had the opportunity during our lunch break to meet with members of the Young Elected Officials (YEO) Network and ministerial leaders (AAMLC) from People For the American Way Foundation.

Later that day, we headed over to a rally and march only a few blocks away. At this time, the weather had reached its peak of 93 degrees, but this did not minimize the crowd of over 600 supporters. Music welcomed us and speakers from across the country greeted us with boisterous calls to action as they prepared us to take to the streets and rally for voters’ rights. We gathered our signs and water bottles and followed the crowd through the streets of downtown Winston-Salem as we chanted, “Forward together, not one step back!” and “What do you want? Justice! When do we want it? Now!” We were escorted by local police while onlookers from the side streets clapped and cheered us on. Music continued to serenade us as young and old, black and white supporters joined hands to dance in solidarity for justice and equality around voting rights. It was a magical experience that could only be felt in that moment. We walked back to our cars after the march not concerned with the sweltering weather or the sweat staining our clothes and faces. We were excited to be a part of history and exercise our rights to march and protest.

The lawsuit appealing H.B. 589 may not be resolved right away, but activists and allies will continue to take to the internet and streets to uplift the voices of marginalized communities whose rights are violated by those who were elected to serve an array of constituents – black, brown, and white. We will continue to interrupt the notion that young people can’t participate in the electoral process. We will align ourselves with the interests of those who fight for equality and human rights. The fight for voters’ rights is a necessary interruption in the face of injustice.