Now that far-right conservative Neil Gorsuch is on the Supreme Court, we once again have a full slate of nine justices, and we will almost certainly see more of the damaging 5-4 ultra-conservative decisions that have been the hallmark of John Roberts’ tenure as chief justice.

We can get a sense of the near-term consequences by looking at the few cases remaining to be heard this term, as well as the ones already accepted for next term. (It is unlikely Gorsuch will cast votes in cases already argued. The last justice to join the Court in the middle of the term was Samuel Alito. He did not vote on opinions in cases argued before he joined the Court, unless they were reargued afterward.)

Perhaps the most high-profile case remaining to be argued this term is Trinity Lutheran Church of Columbia v. Pauley, scheduled for oral arguments next week, on April 19. As discussed in our term preview last fall, Trinity Lutheran has the potential to weaken church-state separation provisions in the U.S. Constitution and in numerous state constitutions. With Gorsuch’s confirmation, that likelihood has increased significantly. 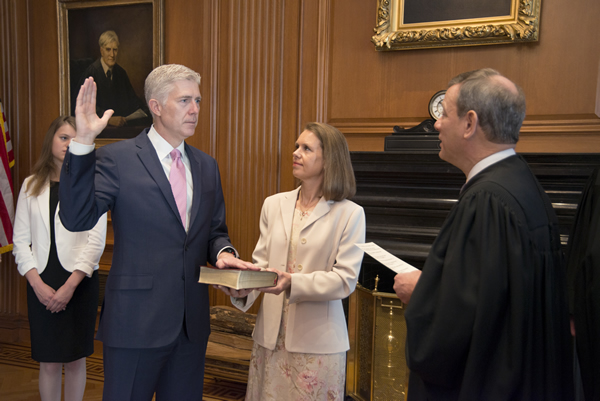 The case involves a Missouri grant program to improve organizations’ playgrounds. Trinity Lutheran applied for a grant for its religious school playground. Approving the request would have violated the state constitution’s Establishment Clause, which explicitly prohibits government funding of churches directly or indirectly, and which also specifically prohibits funding to help or sustain a religious school. So the state deemed Trinity ineligible for a grant.

Trinity claims this violates its Equal Protection and Free Exercise rights, painting state Establishment provisions as unconstitutionally targeting religion for disfavored treatment. Trinity erroneously claims the federal Establishment Clause allows a direct grant in this case, so the state has no compelling reason to justify its differing treatment of churches. However, direct grants to churches are clearly against the meaning and intent of the U.S. Establishment Clause. If the Supreme Court rules for Trinity, it could mark a substantial erosion in the wall of separation between church and state, and it could undermine establishment protections in numerous state constitutions.

Gorsuch’s presence could also tip the scales on three important labor cases next term, consolidated as Epic Systems Corp. v. Lewis. This could extend the conservatives’ work in a series of 5-4 rulings to empower large corporations to use arbitration agreements to prevent consumers and businesses they work with from engaging in class action litigation against them. Corporate interests are now seeking to expand this approach to labor contracts: They are hoping to get the Court’s imprimatur on enforcing employment agreements requiring one-on-one arbitration even when they prevent workers from exercising their rights under the National Labor Relations Act. Justice Scalia had been a reliable fifth vote in such arbitration cases, and Gorsuch’s business-friendly record suggests he will do the same.

But we may not have to wait more than a few days for Gorsuch’s impact to be felt. The Court has been delaying a decision on whether to hear the Masterpiece Cakeshop case since before the current term began, presumably not wanting to hear it without a full bench. This is a case where a baker cited both his free speech rights and his religious exercise rights as justification for refusing to create and make a wedding cake for a gay couple, in violation of state anti-discrimination law. Like Hobby Lobby, the religious exercise component of the case is part of the far Right’s effort to redefine religious liberty from a shield to protect the exercise of religion into a sword to discriminate. As a judge on the Tenth Circuit, Judge Gorsuch made very clear that he is fully on board with this transformation. In Masterpiece, Colorado’s high court ruled against the baker. With a 4-4 split no longer a threat, the conservatives on the Court may see this as an opportunity to reverse the Colorado court and increase the use of religion to deny others their rights. An announcement that the Court has agreed to take this case would be no surprise.

In fact, there will likely be few surprises from Gorsuch.